A Christian pastor and school caretaker who received a death threat for tweeting a warning to Christians that Pride events are harmful to children, is now taking legal action against the school for hounding him out of his job and capitulating to LGBT activism. The case raises the question of how far the LGBT community are prepared to go to silence mainstream Christian beliefs.

Pride not aligned with Biblical teaching

On 1 June 2019, Pastor Keith Waters posted to Christians on Twitter, warning them to steer clear of Pride events that month. He stated simply that Pride events are not aligned with Biblical teaching and that they are especially “harmful to children.” 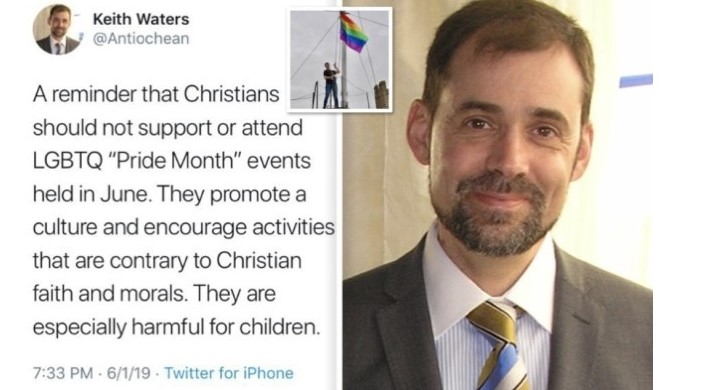 Keith had copied the tweet from a US Catholic Bishop. He said his intention was to address Christians about gay pride events across the UK, as they often involve nudity, people in sadomasochistic outfits and displays of an overtly sexual nature.

Within minutes of posting the tweet, Keith received a response from a local journalist and LGBT activist accusing him of attacking the local LGBT community in Ely ahead of Pride events that month.

The following morning, as Keith was preparing for a Sunday service at his church, a Cambridge based journalist arrived, harassing him and pressuring him to apologise for the tweet, which Keith refused to do. By Monday, just two days later, he was on the front page of the Cambridge Evening News, and online abuse continued to grow.

Harassment followed at his home and on the streets of Ely. On one occasion, his wife answered the door to funeral directors who had been sent to ‘arrange his funeral’. Estate agents also contacted him, having been told he was moving from the area ‘in a hurry’, and he was at one point nearly knocked off his bike by an angry local resident in her car who wanted to remonstrate with him. False rumours were also spread that he was a child molester and there were calls from local councillors for Keith to be investigated by police for a ‘hate incident.’

Fearing for his, his family’s and his congregation’s safety, Keith decided to delete the tweet.

Following on from this abuse and harassment, his caretaker role at the local primary school now came under threat as he was told he was being investigated for ‘bringing the school into disrepute’.

One letter sent to the school claimed that Keith’s tweet had called for ‘violence against people who support the Ely Pride Festival’ and an anonymous teacher claimed that his tweet fell “within the British government’s definition of extremism” so action needed to be taken against him.

‘An asset to the school’

Three years ago, Keith took a 60% pay cut from his role as an Estates Manager at one of Cambridge University’s largest colleges to work as a caretaker at the Isle of Ely Primary School. He took the job with the agreement that he would combine the role with his duties as Pastor of Ely’s New Connexions Church.

As a liked and respected member of staff, in his final appraisal he was described as “an asset to the school”. Keith also went above and beyond his duties as caretaker, drawing on his expertise to put in place fire safety regulations, and organising gardening lessons for troubled pupils who were physically threatening teachers.

During the investigation, however, the school’s headteacher caved to a number of demands from a handful of LGBT activists, including some parents, and Keith was issued with a final warning for allegedly bringing the school into disrepute and breaking the school’s code of conduct.

As a result, Keith believed he could no longer combine his roles as pastor of his church and caretaker of the school, and decided there was no alternative but to resign.

Now, supported by the Christian Legal Centre, Keith is suing for constructive dismissal, indirect discrimination and breach of public sector equality duty. He also believes that the school has interfered with his rights to freedom of religion, expression and thought.

‘An attack on anyone who dares question Pride’

Keith commented: “Anyone who believes in freedom of religion and expression should be very concerned about my story. This was an attack, not just against my Christian beliefs, but against anyone who dares to question these matters in public. The biggest concern should be that a story like mine is becoming normal.

“I maintain that my tweet did not discriminate against anyone. It was directed to Christians and it did not criticise individuals or the LGBT community, only Pride events. Other people have been mortified at how I have been treated but are too fearful to speak out.

“Children should never be exposed to nudity or sexual acts, whether that’s at Gay Pride or anywhere else. I am determined to fight for the freedom to say that, and believe that no one should lose or be forced out of their job for holding and expressing legitimate views.”

‘We are living in very dangerous times’

Andrea Williams, Chief Executive of the Christian Legal Centre, said: “Our schools and churches need more community-minded people like Pastor Keith Waters, not less. For sending one tweet, that raised genuine concern for children, Keith has been threatened, harassed and hounded out of his employment.

“This is not a local issue distinct to Ely, but a growing intolerant and threatening trend towards, not just Christians, but anyone across the country who dares to oppose Pride.

“Pastor Keith Waters is right to say that Christians should not attend gay Pride events as they are harmful to children. They often exhibit nudity and explicit displays of an overtly sexual nature that no child should have to see. If a Christian pastor can no longer say this publicly without receiving death threats, then we are living in very dangerous times.

“As we launch this case, we call on the Church to do more to protect courageous Christians like Keith Waters, and to speak publicly on how God’s good pattern of marriage between one man and one woman is a foundation for a healthy society.

Find out more about Keith Waters
View other articles
|