‘No evidence’ to justify Oxford college cancellation of Wilberforce Academy

An independent Inquiry has found no evidence to justify an Oxford College apologising to its students for holding a Christian youth conference and then cancelling the booking for the same event this year.

After student activists complained about the conference, Worcester College apologised for causing them “significant distress” and vowed never to host such a conference again.

Following publication of the Inquiry, the Free Speech Union has written to the Master of Worcester calling for the event to go ahead saying that: “No higher education institution should apologise for free speech.”

In September 2021, Worcester College, Oxford led by the former chair of Stonewall and the Equality and Human Rights Commission (EHRC), David Isaac, capitulated to student activism by apologising for hosting the Wilberforce Academy, an initiative of Christian Concern.

The college was reported to have told a student newspaper:

“The Wilberforce Academy’s views on “reproductive rights” and “conversion therapy” do not align with our values, and we are aware that the conference’s presence and promotional materials have caused distress to many members of the College.”

It added that the college would use its profits from the conference for “dedicated equality, diversity, and inclusivity initiatives.”

A decade of equipping students and young professionals

For over a decade, the Wilberforce Academy has run a one-week conference for university students and young professionals who want to work out how to apply their Christian faith in the current culture and more specifically within their chosen vocations including law, politics, education, media, arts and business.

Topics covered by expert international speakers include: the role of Christianity in shaping law and culture; understanding today’s context; biblical ethics on human identity and sexuality; comparative religion including examining the nature of Islam.

The conference includes teaching of biblical beliefs that have been recognised by the Christian Church globally for the past 2,000 years.

Christian Concern and Wilberforce Academy delegates reported that the week had been a positive experience for delegates and college staff who had said they were looking forward to welcoming them back next year.

Following complaints, CC commissioned an independent inquiry into whether the allegations were true. After thoroughly reviewing all the available evidence given by 114 attendees – the conclusion is made that complaints against the Wilberforce Academy delegates are ‘without substance.’ 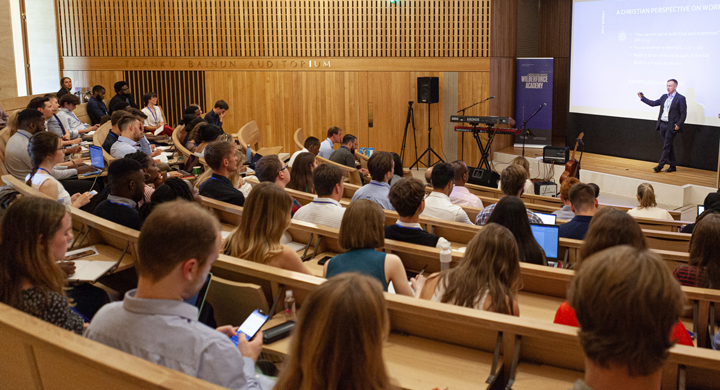 Following media coverage of Mr Isaac’s apology to students, the story was raised in parliament during a debate on the  government’s proposed Higher Education (Freedom of Speech) Bill. MP Fiona Bruce cited the story from the Telegraph and said:

“The Wilberforce Academy has been held at Oxbridge colleges for the last 11 years. I have actually spoken at one of its conferences; the students who attend the conference are serious young people seeking to inform themselves about issues of the day. We need to encourage that, not shut it down.”

The position of Worcester College appears to be at odds with the government’s proposed bill which includes: “measures to ensure that the use of any premises of the provider is not denied to any individual or body’, based on the ‘policy or objectives or the ideas, beliefs or views of any of its members.”

Nonetheless, David Isaac proceeded to justify the apology and even cancelled the Wilberforce Academy’s preliminary booking for the conference scheduled to be held at the Worcester College in September 2022.

Following enquiries about why the booking had been scrapped, the college informed Christian Concern in November 2021 that the College would be conducting an internal review.

Responding to inquiries about the investigation, the college refused to disclose any evidence, but said that the college claimed to have received ‘a number of complaints’ which alleged attendees had been ‘unduly demanding’, had been ‘difficult to deal with’ and that Covid protocols had been broken.

The college claimed that leaflets had been ‘aggressively distributed’ and ‘without consent’.

He added that there had been:

“Unsolicited approaches by your conference delegates to staff and students within the confines of the College in respect of various issues, especially LGBT conversion therapy, which they found upsetting.  This was especially the case for new students attending a parallel event, Opportunity Oxford, which prepares young people for their impending admission to Oxford University.”

“As you will be aware, Oxford University and Worcester College seek to establish an inclusive culture which promotes equality, values diversity and maintains a working, learning and social environment in which the rights and dignity of all members of the College and University community (including people of faith) are respected.”

Christian Concern requested details of the complaints and the leaflet which had been alleged to have been distributed in order to further investigate. However, Worcester College has to date refused to reveal any details, with Mr Stephenson saying: “I am afraid that I am unable to provide the detailed information you have requested… The information provided does not enable me to identify any of your delegates… I have not been able to obtain a copy of the leaflets that were alleged to have been distributed.”

Seeking to determine if there was any truth to Worcester College’s claims, Christian Concern commissioned an independent inquiry from Michael Stewart, an accomplished charity lawyer with experience in these kinds of investigations.

114 of the 124 attendees responded with witness statements in response to the allegations, despite Worcester College refusing to engage with the inquiry.

Mr Stewart’s report found scant, if any foundation to the allegations that would justify the subsequent actions by the college.

Regarding the complaint about delegates breaking Covid protocols, for example, the Inquiry found the allegation:

“Confusing, because the College had no Covid restrictions in September. This had been confirmed with the events team verbally. This is borne out by Worcester College’s Covid-19 Update for September 2021: “In line with the wider University and the changes in government guidance, College has removed the requirements for mandatory face coverings and social distancing on the College site. We will be resuming most of our normal College activities for Michaelmas Term and reopening spaces that have had to remain closed during earlier phases of the pandemic. Normal lunch and dinner will resume…”

Likewise, no attendee recalled making or witnessing an unsolicited approach to a member of staff or student from another event to discuss a controversial topic.

Rather, delegates from the Opportunity Oxford event being run in parallel had initiated discussions regarding conversion therapy with Wilberforce Academy students after finding a programme for the week with a list of speakers in the dining hall.

One attendee said in their statement:

“The allegations that have been made regarding inappropriate behaviour are not in keeping with my own experiences with the delegates with whom I had the pleasure of teaching and interacting. I found them unfailingly courteous and, in their debates with each other, mature and respectful.”

Another said: “I find it very sad that people are spreading lies when the week was a very positive week where many of today’s issues could be discussed in love and respect.”

“The interaction between attendees and College members was not, as the College claimed, a ‘distressing’ episode meriting unreserved apologies. It was, in fact, a laudable example of free speech in action. Students and attendees, showing mutual respect and curiosity about each other’s beliefs, engaged in civil discussion on a controversial topic.”

“The College’s uncritical acceptance of claims that the conference harmed students was a serious error. In keeping with, as you put it yourself, your own and the College’s commitment to freedom of speech, the College should have investigated and faced down students’ ill-founded complaints. No higher education institution should apologise for free speech.”

The FSU has called on Worcester College to apologise and to reinstate the booking for Wilberforce Academy in 2022.

“The Inquiry has found, as we anticipated, no evidence that any delegates have done anything to warrant apologising for, being cancelled or discriminated against for their Christian beliefs.

“Worcester College capitulated to complaints from a handful of students who appear to have felt “offended” following debate on some of the most important social issues of our time.

“It is disappointing that such a prestigious university and college should be cancelling Christian beliefs, debate and free speech.

“We will continue to speak of Jesus Christ who was himself an “outsider” and by his words and actions demonstrated his commitment to reaching the marginalised, excluded and vulnerable so that they could discover true hope and everlasting love through him, even sacrificing his own life to do so.

“Oxford University should continue to stand for free speech and free expression and allow its students to have the intellectual ability to decide whether they wish to attend external events, and to make up their own minds on what they hear.”