A Christian ministry is being targeted by activists because it offers help to people who want to move away from same-sex attraction or behaviours.

Core Issues Trust (CIT) is a non-profit Christian ministry that supports men and women who voluntarily seek change in sexual preference and expression.

Led by Mike Davidson, the group has received abusive calls and messages, and been dropped by multiple service providers since being targeted through a social media campaign.

The organisation has now been told by Barclays Bank that its accounts will be closed. The Christian Legal Centre is supporting Mike Davidson and CIT as they seek to resolve these issues.

Christian Legal Centre’s chief executive Andrea Williams commented, “If it is CIT first, it will be churches next.

“If banks and other service providers start to placate social media campaigns by unilaterally terminating their accounts then the UK will be a very difficult place for Biblically faithful Christian ministries.”

On Friday 3 July Tweets appeared pressuring Barclays Bank to stop providing CIT with services. On Monday 20 July Barclays appears to have agreed to this request by informing both CIT and IFTCC that their accounts will be closing in two months, mid-September. The International Federation for Therapeutic and Counselling Choice, a project supported by CIT has also received closure notice.

Barclays Bank, a top-ranking employer of Stonewall’s list has provided no explanation for the decision. Since 28 June 2020, CIT has faced a co-ordinated, aggressive campaign from activists who pejoratively label their work as ‘conversion therapy’. These incitements via social media have now been reported in detail to the Parliamentary Petitions Committee currently inviting evidence submissions of online abuse, and as Serious Incident Reports to the Charity Commission of Northern Ireland. Some of the abuse received has been reported to the police.

Core Issues is accused by LGBT activists of practising ‘conversion therapy’ – a misleading term referring to attempts to change sexual orientation. Campaigners use this term to lump together outdated and harmful practices – like electro-shock and aversive therapies, chemical castration and even ‘corrective rape’ – with conversational therapies. As far as we know, no one is really attempting the harmful therapies in the UK, so bans on ‘conversion therapy’ (promised by the Prime Minister this week) only really target Christian ministries like Core Issues Trust.

Campaigners use consensus views from mental health executives to suggest that Mike Davidson is harming people and to pressure service providers into banning his ministry. But they haven’t only made misleading reports and complaints – they’ve led a campaign of intimidation and harassment.

A campaign of intimidation

On social media there has been a campaign of aggressive trolling and dehumanising of CEO Mike Davidson, Trustee Matthew Grech and Co-Worker Kylie Delia. A text message hoped that staff family members are raped and killed. Multiple complaints to social media sites were made about CIT. CIT videos were taken down by Facebook as was the CIT banner. CIT Instagram content was removed. CIT staff were blocked from posting on Facebook and were unable to block trolls. 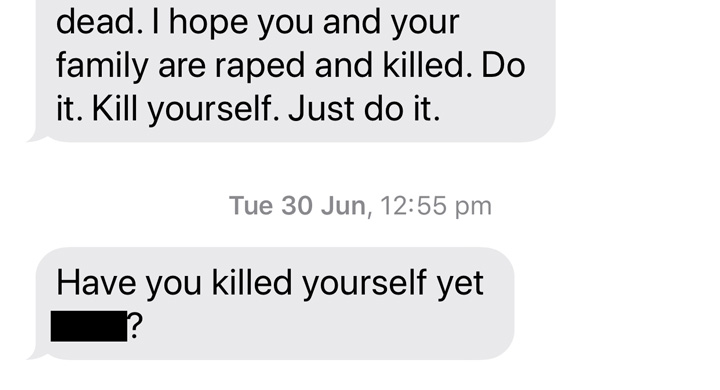 Earlier this month, Mailchimp unilaterally terminated services to CIT without any notice or explanation which made it difficult for CIT to contact its supporters. PayPal also permanently terminated its CIT accounts without warning and with no explanation, restricting the ability of supporters to make donations.

A text message with a satanic image was sent to the CIT mobile phone. Some of this abuse has been reported to the police.

‘This amounts to mob rule’

Mike Davidson, CEO of CIT said: “A coordinated campaign has resulted in our ministry coming under immense pressure and key service providers cancelling their services.

“The term ‘conversion therapy’ is being used as a catch-all phrase designed to discredit any help that people may provide to those with mixed sexual attractions who prefer their heterosexual side. This could include a listening ear, formal counselling or spiritual support.

“The UK is now becoming an intensely intolerant country. Key service providers have cancelled their services to a Christian charity because of a social media mob.”

“We call on the government to put a halt to this kind of mob rule and to assert the rights of Biblically-faithful Christian organisations to be serviced by businesses without facing such intolerant discrimination.”

Find out more about Core Issues Trust
View other articles
|