The political push for pronouns

Tim Dieppe, Christian Concern’s Head of Public Policy, comments on the push for people to ‘state their pronouns’.

Push for pronouns in email signatures

Last month, the BBC asked all staff to state their pronouns in their email signatures in a drive to be more inclusive of transgender employees. The BBC employs 400 people who identify as transgender according to internal surveys – that is nearly 2 percent of the 22,000 employed by the broadcaster.

No doubt other businesses and organisations across the country are making similar requests of employees.

Stonewall recommends adding pronouns to email signatures. It also recommends that when you introduce yourself you should also introduce your pronoun. It is probably not a coincidence that the BBC is a Stonewall Diversity Champion, as is the Scottish government. 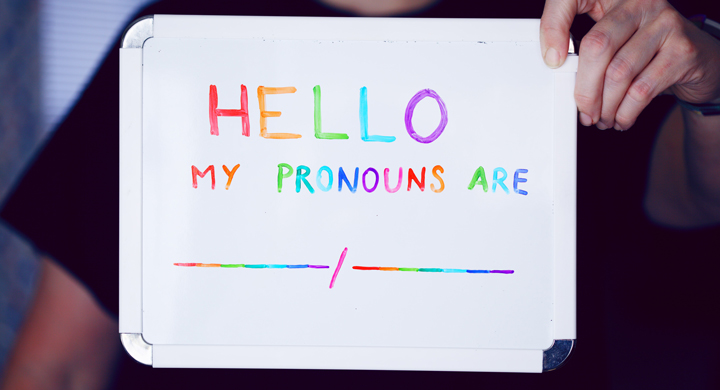 To be quite frank, if someone asked me what pronouns they should use to refer to me I would assume they were intending to mock or insult me. In nearly all cases, it is quite offensive to say to someone that you can’t tell what gender they are. Not all those identifying as transgender agree with advertising pronouns on emails or elsewhere either. It draws needless attention to them and can be offensive in suggesting that their gender is not clear.

“For all those lesbians who are constantly told we ‘look like men’ because we refuse to wear make-up, high heels and corsets, and dress for the benefit of men, it is offensive and deeply anti-lesbian to now get asked ‘what are your pronouns?’ We have struggled for years to win respect and acceptance as women — why should we have to spell it out.”

Dame Jeni Murray, long-time presenter of BBC Radio 4’s Woman’s Hour, says she was horrified to learn that the BBC was advising staff to put their preferred pronouns on their work emails. She explains:

“The use of pronouns is a political statement. It suggests a belief that gender identity overrides sex and, increasingly, we are seeing more and more women expressing their concern that what they believe, that sex matters, is slowly being eroded.”

Murray is correct. Advertising pronouns is a political statement that signals your agreement with trans ideology. To invite someone to state their pronouns is to invite them to state that they agree with transgender ideology.

You will never use someone’s pronouns in an email to them in any case since you are communicating directly with them. Therefore, there is no practical reason to declare one’s preferred pronouns in email communication. This lack of practicality in the suggestion of pronouns in email signatures exposes the political nature of the idea.

If stating pronouns is political virtue signalling to show support for transgender ideology, then this is something that Christians should resist. I was struck when reading Live not by Lies, by Rod Dreher, how Christians managed to keep their faith intact under huge pressure of the totalitarian communist state. The maxim of Solzhenitsyn was “Never knowingly support lies!”  This is a very helpful rule to apply. Christians should not support or endorse something they know to be false. And transgender ideology makes false claims about the nature of gender.

It is encouraging to recognise that the majority of civil servants in Scotland disagree with advertising pronouns. Most people are at least suspicious of trans ideology. Christians will be far from the only ones who will resist trans ideology virtue signalling. Such resistance is a witness to the truth that God made us male and female. Those who speak the truth will be on the right side of history!