Book review: ‘Live not by Lies: A Manual for Christian Dissidents’

Bestselling author Rod Dreher has borrowed the title of this book from that of an essay by Soviet dissident and Nobel Prize winner Aleksandr Solzhenitsyn which circulated in Moscow from 1974 and is dated on the very day that the police broke into his apartment and arrested him. 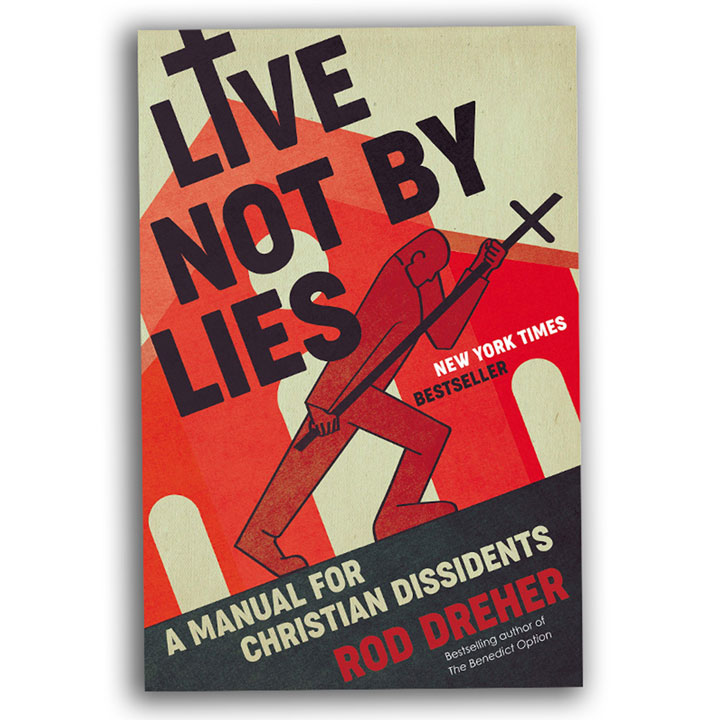 The thesis of the book is that Western culture today is moving towards a form of soft totalitarianism which demands allegiance to its beliefs. Those who have lived under communist totalitarianism are alarmed at what they now see in the West. Dreher has interviewed several such dissidents. Their stories and lessons on how to live faithfully under totalitarianism form the substance of the book. A representative quote from one such dissident sums it up:

“With our eyes fixed intently on the West, we could see how it was beginning to experience the same things we knew from the time of totalitarianism. Once again, we are being told that Christian values stand in the way of people having a better life. History has already shown us how far this kind of thing can go. We also know what to do now in terms of making life decisions.” (p211)

If that sounds alarmist, consider for a moment: have you ever self-censored yourself from saying what you really think, or feared the consequences of speaking the truth? Have you ever decided to remain silent rather than challenging what you know to be false? This is what former dissidents tell us it is like to live in a totalitarian society. We all know today that dissent from ‘politically correct’ views can be heavily penalised with victims being vilified, insulted, demonised, and sometimes losing jobs or careers. This is totalitarianism in soft form, and it is already here.

Christian Concern’s legal cases bear this out. Kristie Higgs lost her job for posting on Facebook concerns about sex education. Richard Page was dismissed as a magistrate for saying, in private, that children do better with a mother and a father. Actress Seyi Omooba was dropped by her agency after a Facebook post was found which expressed disagreement with same-sex marriage. Pastor Josh Williamson was told by police not to offend the LGBT community after being targeted by a wave of anti-Christian abuse – including threats of violence and calls for his church to be burnt down.  Barclays Bank closed the accounts of Christian ministry, Core Issues Trust after a targeted campaign. All these, and many more, are evidence that we are already living in a totalitarian society.

The signs are that this is getting worse. The Scottish Hate Crime Bill could criminalise what you say in your own home. Expressing disagreement with transgenderism could land you with a criminal record, not merely the loss of your job. The Law Commission is also proposing to criminalise ‘hate speech’ in your own home. If the government progresses plans to outlaw so called ‘conversion therapy’ then quoting the Bible or teaching Biblical sexual ethics could be criminalised.

The coronavirus crisis has only served to accelerate the trend towards totalitarianism. Who would have imagined last year that we in this country would give up long cherished freedoms and comply with the criminalisation of gathered worship or prayer? Then there is state surveillance, with track and trace. GCHQ has been given access to mobile phone data to check compliance with lockdown measures. Big corporations know your every move on the internet or email, while Twitter and Facebook censor ‘offensive’ expressions such as ‘misgendering’. We are so used to allowing ourselves to be tracked in all these ways that it is very difficult to escape.

If Dreher’s pessimistic analysis is anywhere near correct, then we have something to learn from those who have lived through communist totalitarianism and kept their faith intact. Solzhenitsyn warns that we cannot hope to resist the coming soft totalitarianism if we do not have our faith in order (pxiv). Key to this is to value truth so highly that we are prepared to suffer for it. Totalitarianism depends on people’s fear of challenging lies. Solzhenitsyn’s maxim is “Never knowingly support lies!” As Dreher comments: “You may not have the strength to stand up in public and say what you really believe, but you can at least refuse to say what you do not believe.” (pxiv). As we reflect on where our society is going, we realise that this is a vital lesson for those who would be Biblically faithful Christians to grasp.

A danger here is the temptation to decide that you can act like a conformist while inwardly dissenting (p16-17). There are different levels of this type of deception, and we can all make excuses for it at certain points, but ultimately if you act the whole time you end up losing your soul. At some point, we must resolve to express our dissent outwardly, and not pretend we can get away with mere inward dissent. Refusing to live by lies means refusing to ever express agreement with something we know is a lie. In some cases, silence or participation constitutes agreement.

Dreher emphasises that we need to value nothing more than the truth. Truth is worth suffering for. Refusing to accept a lie is a witness to the world that there is a higher truth which is worth sacrificing for. As one dissident says:

As Dreher puts it, “Truth cannot be separated from tears.” (p212)

There are many other lessons for would-be Christian dissidents in this book. There are chapters on cultivating cultural memory, families as resistance cells, standing in solidarity, and accepting the gift of suffering. One thing that lockdown measures should be teaching us is the need to prepare for totalitarianism. We need to build up the resistance to the coming occupation and prepare Christians to live differently and witness to the truth by suffering.

This book is a sobering read. Too much of the emphasis of teaching in the Western church has been on ‘victorious Christian living’. This is not the experience of the saints interviewed for this book, or indeed of many thousands of saints through the ages who have suffered and been martyred for the faith. It may well not be the experience of Christians in our own generation as our culture becomes progressively totalitarian and intolerant of Christian beliefs. We need to be a church that is ready to suffer.

Dreher’s book is essential reading for those who aspire to be part of the Christian resistance movement. A movement that will ultimately win, but that victory is only likely to come at a price. We need to decide now that the price is worth it. Many will compromise for convenience, but some will not. We can learn today from those who have paved the way in the past. It’s time to decide to live not by lies.