Tim Dieppe comments on the abuse of pronouns and how the law and the police have capitulated to the political LGBT lobby.

Last week it emerged that police are formally investigating some stickers in Oxford. One such sticker reads:

Thames Valley Police have put out an “Appeal for witnesses following incidents of public order.” It says the following:

Thames Valley Police is appealing for witnesses following a number of public offences in Oxford.

Officers are investigating a large number of offensive stickers that have been placed across Oxford city centre containing transphobic comments. It is believed they started appearing in March 2019 within the High Street, Catte Street and Parks Road area.

Investigating officer PC Rebecca Nightingale based at St Aldates police station said: “Behaviour like this is not acceptable and we take incidents of this nature very seriously.”

Notice that the police say these stickers are “offensive” and that they contain “transphobic comments.” So now we have a situation where a simple dictionary definition is considered so offensive that it is a police matter. Or a simple biological statement is considered transphobic enough for a police investigation.

If quoting the dictionary is a police matter, then we are no longer living in a free society.

This week new sentencing guidelines were published for public order offences. The guidelines recommend that there should be a six-year jail sentence for those convicted of the worst cases of intolerance against gay or transgender people. This is harsher sentencing than those for domestic burglaries. These guidelines will come into effect from January 1. Judges and magistrates are required to follow these guidelines unless they can show that doing so would run against justice.

These sentences will serve to further intimidate people from saying what they really think. People are already self-censoring. When people do not feel free to say what they believe we are not living in a free society.

Wednesday 16 October was International Pronouns Day – in case you hadn’t realised. To mark this occasion, DCC Julie Cook of Cheshire Police, who is also National Police Chiefs LGBT+ Portfolio Lead, put out a tweet containing a 30 second video of her speaking. 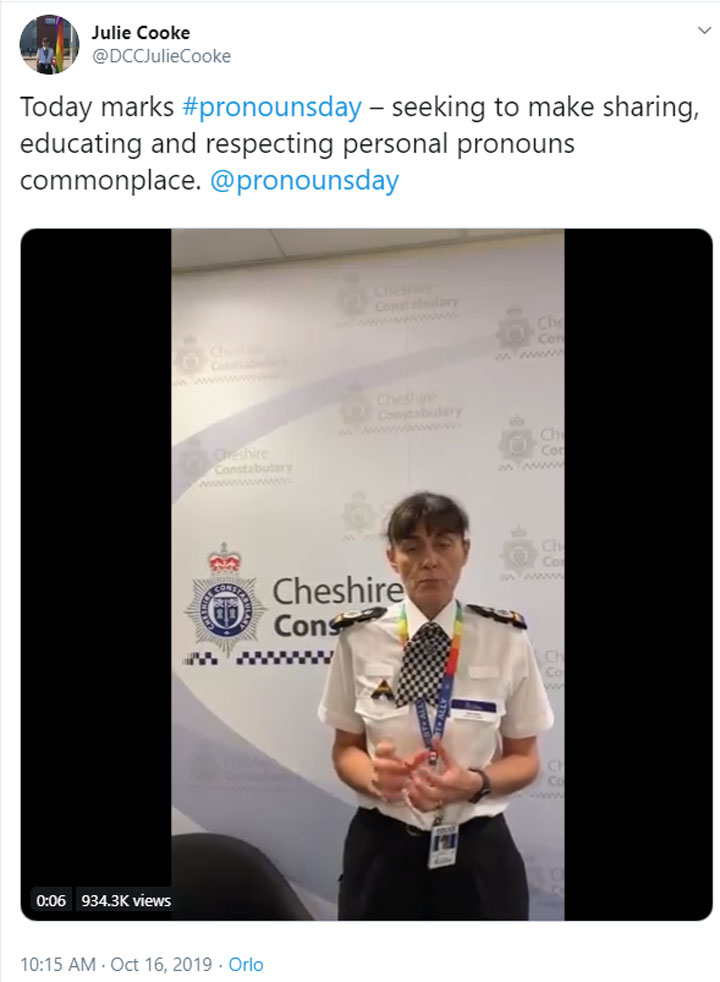 She is wearing a rainbow lanyard which says “LGBT+ ally”, and rainbow epaulettes. In this video she says:

“Being misgendered can have a huge impact on somebody and their personal wellbeing. It also can be used as a form of abuse of somebody, and that just isn’t right. Today is about raising awareness, getting people to have conversations and understanding why it is so important to understand the pronouns that somebody wishes to be used for them.”

So now the police are supporting the LGBT+ political lobby on the abuse of pronouns. If they police are saying that misgendering can be abusive, we are not very far from having compelled speech. “You must say that ‘he’ is ‘she’.” In fact, we have already had a judge tell a witness victim that she should refer to her biologically male assailant as ‘she’. This, in spite of the fact that the victim had sworn to tell the truth, the whole truth and nothing but the truth. When you can’t obey your conscience in what you say, you are not free.

Facebook is also supporting the abuse of pronouns. David Kurten was suspended from Facebook for posting a comment about International Pronoun Day. His guide to pronouns claimed that ‘trans-woman does not exist.’ The point he is making is that a trans-woman remains a biological male. You can’t actually change your biological gender. Saying this is beyond the pale for Facebook. 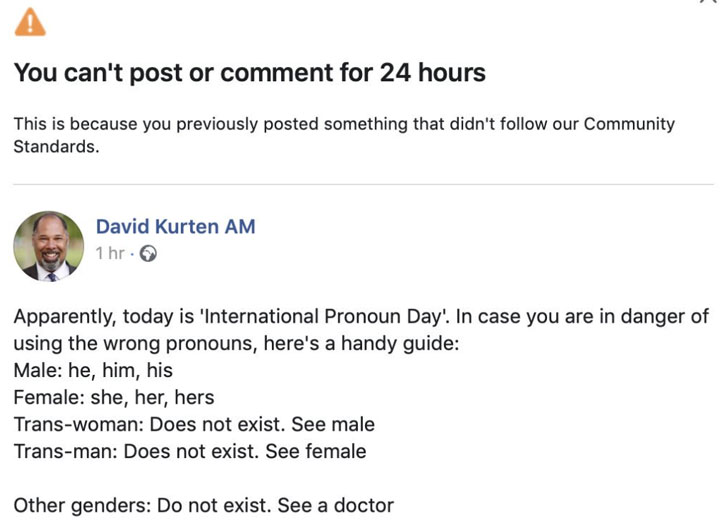 Twitter guidelines formally state that “targeted misgendering or deadnaming of transgender individuals” is prohibited. ‘Deadnaming’ is calling someone who has adopted a new name to conform with an adopted gender by their original name which conforms with their biological gender. So Twitter and Facebook are also policing the abuse of pronouns, though in David Kurten’s case, no specific person was being referenced.

The foundation of human dignity

Earlier this month a judge ruled that belief in Genesis 1:27 is “incompatible with human dignity”. Here is what Genesis 1:27 actually says:

“So God created man in his own image,
in the image of God he created him;
male and female he created them.”

Encapsulated in this verse is the foundational truth that God made humans male and female, and that he made them in his image. This idea that all people are created in the image of God, however old, or young, of whatever race, however sick or healthy, whatever they have done or not done, is actually the basis of human dignity in the West. This verse teaches that human life is sacred and that there is a fundamental equality in this sacredness that applies to all people. Human dignity derives from the idea that human life is sacred. Without this, there is no basis for human dignity. In his statement, this judge actually cuts off the very branch he is standing on. Whence does human dignity derive?

Contemporary society seems determined to strike at foundations that are basic to human culture. We are in a new era when even the idea that people are created male and female is questioned, or even ridiculed, or even held to be incompatible with human dignity and therefore offensive.

A matter of truth and conscience

The truth is that people are created male and female in the image of God. We should respect that image and that sacredness by conforming our language to this truth. The police and judges should not be pressuring people to violate their consciences in what they say about who someone actually is. God made us male and female. We should be honest about who we are. The very foundation of human dignity is at stake.