As we approach one year of the government’s pills-by-post abortion policy, Andrea Williams comments what we now know.

Number 10 was “happy with this,” the Sunday Times was being briefed on the story, and senior officials at the Department for Health and Social Care (DHSC) were preparing for “fall out tomorrow.”

The email, from Matt Hancock’s private secretary, was the culmination of an extraordinary seven days a year ago this week.

Disclosed in the legal case that followed, the email recognised the weight of the decisions being taken, emphasising that the move was categorically ‘temporary’ and would ‘not be permanent’. What was happening, so late on Saturday 28 March 2020 at the heart of UK government, that warranted such serious correspondence?

Government officials were gearing up for an unprecedented double U-turn. It would see the most significant change to abortion legislation since the 1967 Abortion Act and would be published for the second time in seven days.

A week earlier, on the 23 March, the eyes of the nation were fixed in anticipation on the Prime Minister’s television address, which would announce the start of UK lockdown. Just hours before this historic moment, the DHSC published legislation that would allow a woman’s home to become a place where abortion could take place without proper medical supervision.

Pressure had been mounting on the government on this issue for years until, in March 2020, the abortion lobby saw the opportunity it had long been waiting for.

Disclosed documents in our legal case have revealed the direct access key players in the abortion industry have to senior civil servants at the heart of the DHSC. They wield significant influence, do not take no for an answer and, a year ago, repeatedly applied pressure on the government to cave in and allow DIY home abortion telemedicine service.

Clinics were being forced to close, they said, clinic staff were catching the virus, and some media reports suggested the industry was on the verge of collapse.

The line given was that women wanting an abortion needed alternative access to abortion pills without having to be exposed to the virus through a clinic visit.

Pro-life groups, including Christian Concern, picked up on the DHSC’s announcement and issued urgent press releases.

Following media enquiries, Matt Hancock was made aware of what was happening and ordered the legislation to be immediately pulled. 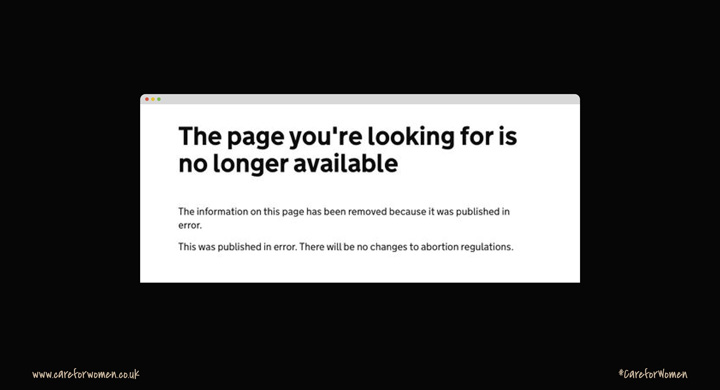 During question time in the House of Commons the following morning on 24 March, Hancock was asked about this four times. He replied to each question with one sentence: “We have no proposals to change any abortion rules as part of the Covid-19 response.”

The next day, 25 March, the abortion lobby, undeterred, persuaded two members of the House of Lords to try and achieve the same change of the law by proposing an amendment to the Coronavirus Bill.

Health minister, Lord Bethell, strongly opposed the amendment on behalf of the government. He explained categorically that the requirement to attend a clinic and speak to a doctor one-on-one was “an essential safeguard” against women being coerced into abortions. The amendment was abandoned, and Parliament went into early recess.

The abortion industry, however, refused to accept this.

Re-grouping following Lord Bethell’s rejection of their demands, an open letter signed by 55 public health specialists urged and guilt-tripped the government to U-turn.

By March 28, Hancock had given way. How, why, and where he stands on the issue now, is a mystery.

News of the U-turn broke in The Sunday Times, and on 30 March 2020 the previously published ‘in error’ legislation allowing women to have unsupervised abortions at home was back on the government website.

There was no scrutiny, no debate, and no democracy involved.

What has followed over the past year has been even more extraordinary and has exposed how concerning the decisions made during that week were.

Christian Concern immediately began to pursue a judicial review of the government’s decision to allow the service.

Clear evidence soon emerged that the service was un-checked and women were suffering and being put at risk.

An NHS email leak, from a senior midwife, revealed the serious life-long harms that women were experiencing, often alone, under lockdown.

A mystery client investigation revealed how the service is wide open to abuse and how abortion providers rush women through the process and brazenly allow illegal abortions for any reason.

But most tragic of all have been the stories, slowly beginning to emerge, from women whose lives have been irreparably damaged due to the service.

Kirsty, 36, was coerced into receiving the pills-by-post and had a traumatic abortion alone. She has said: “The home abortion is made to think you are doing it in the comfort of your own home. But instead, you have the memory of what you have done in your own home forever. My home is no longer my happy safe space, it is the place where I took away my child.”

Women deserve better than this.

Now, however, one year on, despite the promises that this service was just a ‘temporary’ measure, the government has just closed a public consultation on whether to make it permanent.

The immense pressure to allow this service a year ago was never about protecting pregnant women from coronavirus. Abortion clinics are now open, and have been for some time, so why is a ‘temporary’ service needed, let alone a permanent one?

From the beginning this has been about exploiting the biggest crisis this country has faced since World War Two. It was an opportunity to achieve the abortion industry’s long term strategic goal of abortion-on-demand.

A year on there have been over 100,000 DIY home abortions performed. FOI data has revealed a 54% rise in women making 999 calls for anything DIY abortion related. Further data has shown that 250 women a month using abortion pills at home will require hospital treatment to surgically remove retained products of conception.

Faced with such disturbing figures and amidst the continued uncertainty, now is not the time for such a significant and permanent change to abortion law.

We will continue to seek truth and justice on this issue as we wait to hear whether our case against the decisions made by the government a year ago will be heard in the Supreme Court.

You can read more from Andrea in The Critic.

Make sure you’re following us on Facebook and Twitter for the latest on the Care for Women campaign, and find out at careforwomen.co.uk

Join us on 30 March for the video premiere of a new documentary – Back room abortion: the truth behind DIY abortion