Since the introduction of DIY abortion, tragically many illegal and dangerous home abortions have taken place. An industry standard ‘mystery client’ investigation has revealed how abortion providers are breaking the law and putting pregnant women at serious risk. 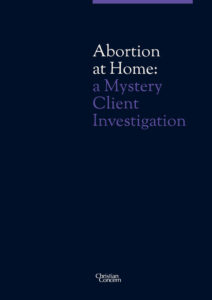 Why was an investigation necessary?

On 30 March 2020, the Secretary of State for Health and Social Care approved a pregnant woman’s home as a place where abortion could be carried out.

This approval enabled fully remote telemedicine services to be carried out, no longer requiring a woman to visit a clinic to access abortion or receive the standard tests and scans usually necessary for a termination of pregnancy.

Prior to this approval, it was necessary for a woman’s eligibility for early medical abortion at home to be assessed professionally by an authorised service provider during a clinic visit. This assessment routinely included the use of an ultrasound scan to confirm the gestational age of the pregnancy.

The approval of a woman’s home and the implementation of a fully remote telemedicine process means that assessing the gestational age now solely depends on the woman’s accurate and honest recall of the first day of her last period. Previously, the use of an ultrasound scan would have confirmed an accurate gestational age.

In effect, the woman has been co-opted as an essential member of the multidisciplinary team (MDT) working for the registered medical practitioner (RMP), providing important clinical information necessary for the correct certification of the termination of pregnancy by the RMP, to ensure compliance with the 1967 Abortion Act. When acting in good faith, the RMP is now solely relying on the woman’s accurate and honest disclosure and self-assessment.

We designed and implemented this mystery client survey to explore the reality of these concerns; to test the hypothesis that these new telemedicine regulations mean that service providers are now solely reliant on their clients’ accurate and honest recall of the first day of their last period and self-assessment of their medical history.

Each volunteer was asked to take on a specific persona, the role which would be acted during the calls to a service provider. 26 sets of mystery client calls were completed for a variety of personas including:

All calls were recorded, and the recordings have been transcribed; we have included full transcripts for two mystery clients, Eve and Saskia, at the end of the report.

Each of the mystery clients provided a false name, date of birth, and contact details. They provided false registration data when asked for details of their GP surgery, they were not registered with the NHS. They each mislead the service provider about their medical history and their gestational age, some even changed their gestational age mid-process. The only real data given was the address to which the abortion pills should be posted, so that the project could ensure the safe receipt, handling, and disposal of the treatment packs. After making 2 or 3 phone calls, taking no more than an hour in total, our 26 mystery clients received 26 abortion treatment packs at home (pills-by-post), for women who do not exist and are thus not registered by the NHS, and based on a set of false personal and medical data: BPAS 13, MSUK 11, and NUPAS 2.

The investigation report discusses our findings, which are based upon a detailed review and analysis of each of these calls. Findings are grouped together as follows:

Key recommendations arising are as follows: