No terrorists are Islamists

Tim Dieppe comments on news that police are considering dropping the term ‘Islamist’.

The police are considering dropping the terms ‘Islamist terrorism’ and ‘jihadis’ when describing terrorist attacks carried out by, um…well… anyone who says they were motivated by Islam or Jihad.

‘We know better than the terrorists’

Sarcasm seems to be an appropriate way to mock this proposal. One can imagine a politically correct police officer saying something like this:

There is no such thing as an ‘Islamist terrorist’. Neither are there any ‘jihadis’. If a terrorist says he or she is motivated by Islam he or she is wrong. He or she is definitely motivated by something else. Whatever it is, it’s not Islam. If verses from the Qur’an are quoted by terrorists, then that’s just a distraction. We know better.

The very last thing any terrorist would want is sharia law. It doesn’t matter what they say. They definitely want something else. Probably equality and democracy.

It would be Islamophobic to talk of ‘Islamists’ or ‘jihadis’, so we will pretend such people do not exist just to be safe. We wouldn’t want to offend anyone.

It is now a serious problem that the police appear to be more concerned about being politically correct than about tackling crime. The police go to great lengths to investigate ‘hate speech’ such as the notorious case of Harry Miller who was investigated for his tweets. Earlier this year it was reported that the police have recorded more than 87,000 ‘non-crime hate incidents’ over the past five years. The other day, someone posted a disturbing video online of two plain clothes thought-policemen turning up at his door asking to interview him about his Facebook posts. The police appear to be more concerned about what people say than what they do. Last week we reported on the police’s close ties with Stonewall which compromises the political neutrality of the police.

Now the police are so afraid of offending Muslims that they are considering carefully avoiding any hint of an Islamic link to any terrorism. This would mean that we must not discuss the ideology that motivates Islamic terrorists. We could not strategize or prepare for attacks from Islamic motivated terrorists. It would be Islamophobic to state that the dominant ideology of terrorists today is Islamic.

Nick Timothy, who spent six years working in counter-terrorism with the police and intelligence agencies, said that it is “unhelpful in counter-terrorism to have a sense of denial about the ideology that spawns the most serious violent threat we face. Its name is Islamism.” 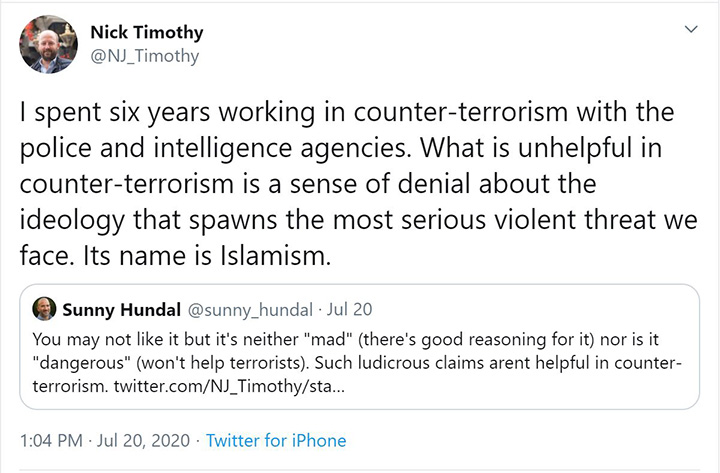 Earlier this month, a female supporter of Islamic State was jailed for plotting to carry out a terrorist attack on St Paul’s Cathedral in London. She also admitted plotting to blow up the central London hotel where she was staying. She said in a message: “I want to kill a lot. I would like to do church… a day like Christmas or Easter good, kill more. I always send threats. But I want to make threats real.” As she was led to the cells, she raised her finger and pointed it to the ceiling in a gesture used by Islamic State militants.

Following her sentencing, Commander Richard Smith, head of the Metropolitan Police’s Counter Terrorism Command said: “This case is a stark reminder that the threat from terrorism remains as real as ever.”

40,000 people pose a terrorist threat to the UK

This is the latest example of how successful our security services have been in foiling terrorism plots. The national terrorism threat level remains ‘substantial’, meaning that an attack is likely. In April it was disclosed that there are more than 40,000 people who MI5 are aware of who post a potential terrorist threat to the UK. 30,000 of these are under active investigation, and 20,000 have been investigated in the past and might engage in terrorism in the future. The list included Khairi Saadalla who has been charged with killing three people in Reading in a suspected terrorist attack. Richard Walton, former head of the Metropolitan Police Counter Terrorism Command said: “Nine-tenths of the people on that list are Islamist extremists.”

Is Islam a religion of peace?

There is a reason why 90% of these people are Islamists. It is not an accident. Most Muslims are certainly peaceful, but the religion itself, from its texts, its history, and the example of Mohammad, is not. I have written in more detail an answer to the question “Is Islam a religion of peace?” That article looks at the meaning of ‘Islam’ and of ‘Jihad’ and the teaching of the Qur’an.

The police are losing moral authority

If we can’t even name the dominant ideology of the terrorists then we have already lost the battle. Effective counter-terrorism requires understanding the ideologies involved. If the police are to be trusted by the public then they need to stop pandering to political correctness. People need to trust the police to speak openly and honestly, calling a crime a crime and not hiding the motivations of anyone. Fortunately, at present dropping the terms ‘Islamist’ and ‘jihadi’ is only a proposal. It is shocking and disturbing, though, that it is being given the slightest credence. What the police need now is moral authority. Policing ‘hate speech’, promoting Stonewall ideology, and avoiding reference to Islamists all serve to undermine the moral authority of the police. It is time for someone to shake up the police and recover their moral authority. Once the police lose the respect of society, we have a recipe for chaos.