Tim Dieppe, Christian Concern’s Head of Public Policy, comments on the recent vote in the House of Commons to criminalise offering help outside abortion clinics.

In a devastating move to restrict free speech, on Tuesday MPs voted for an amendment to the Public Order Bill which will impose buffer zones around all abortion clinics in England and Wales. The amendment would criminalise ‘expressing an opinion’ near an abortion clinic.

The amendment passed by 297 votes to 110. You can see how your MP voted here.

A breach of human rights

There are already laws which prohibit harassment and maintain public order, including laws in place to ensure that women are not harassed or intimidated outside abortion clinics. The new buffer zone law is draconian in its restrictions, in prohibiting discussion or debate about abortion anywhere near an abortion clinic. It would potentially criminalise those who simply stand peacefully near abortion clinics. It would be a clear breach of human rights.

There is no evidence of a need for any new laws restricting activities outside abortion clinics. Pro-life volunteers are peaceful and caring. In Scotland, Freedom of Information Requests showed that Police Scotland had no recorded incidents of intimidation or harassment at thirteen different locations across Scotland between 1 January 2016 and 31 December 2021. Even if there were incidents, harassment is already an offence.

Many mothers have been helped

Many hundreds of women have been helped by volunteers who make themselves available outside abortion clinics to talk to women who are feeling unsure about going ahead with the abortion. They offer and provide practical support and make clear that there is another option.

Sir Edward Leigh MP in his speech referred to the story of one mother Alina Dulgheriu and quoted what she said:

“The day I made my way to the abortion facility was the darkest day my heart has ever known. All I needed was help until I gave birth. A lady and a leaflet. That’s all it took. Right there at the steps of abortion centre. From all that darkness, at last I felt hope, I felt for the first time that my child was wanted, not only by me, but also by complete strangers. For the first time, I felt that I was not walking alone on the day I was meant to end the life within me—my child. I cannot express the joy and how fulfilled I felt as a woman, as a mother, to be given the chance to have my child. A just and caring society doesn’t criminalise people for offering help to vulnerable mothers.”

Carla Lockhart MP recounted the story of another mother who describes her daughter as “an amazing, perfect little girl” and the love of her life. This mother said:

“The potential introduction of buffer zones is a really bad idea because women like me, what would they do then? You know, not every woman that walks into those clinics actually wants to go through with the termination. There’s immense pressure, maybe they don’t have financial means to support themselves or their baby, or they feel like there’s no alternatives. These people offer alternatives.”

Her daughter would not be alive today if buffer zones were in place.

Criminalising offering help to women who feel they would rather continue with the pregnancy but are pressured by family or economic circumstances is abhorrent. The new law could criminalise a friend accompanying a woman to an abortion clinic who says, “are you sure?” – even if the woman is happy for that question to be asked. The buffer zone plan is meant to be ‘pro-choice’ but it is actually anti offering any choice to women who may wish to reconsider having an abortion.

The amendment (New Clause 11) proposes to criminalise anyone who “seeks to influence” someone within the buffer zone. This is such a broad blanket prohibition. It also criminalises anyone who “informs or attempts to inform about abortion services by any means.” Those voting for this amendment actually want to criminalise informing people. It even criminalises advising or attempting to “advise or persuade, or otherwise express an opinion.” The mere expression of an opinion would be a criminal offence! This is a clear breach of the basic human right of freedom of expression.

It bears repeating that this is a manufactured problem. There are already laws to deal with harassment. The vast majority of volunteers outside abortion clinics are peacefully offering help. Help that is sometimes gratefully received. What we have here is the proposed criminalisation of advising, informing or offering help. It will be a criminal offence to peacefully offer to help a pregnant woman anywhere near an abortion clinic!

This follows swiftly off the back of a buffer zone being set up around an abortion clinic in Bournemouth just last week. This buffer zone specifically criminalises “prayer or counselling.” It also makes it an offence to “genuflect” or “cross themselves.” 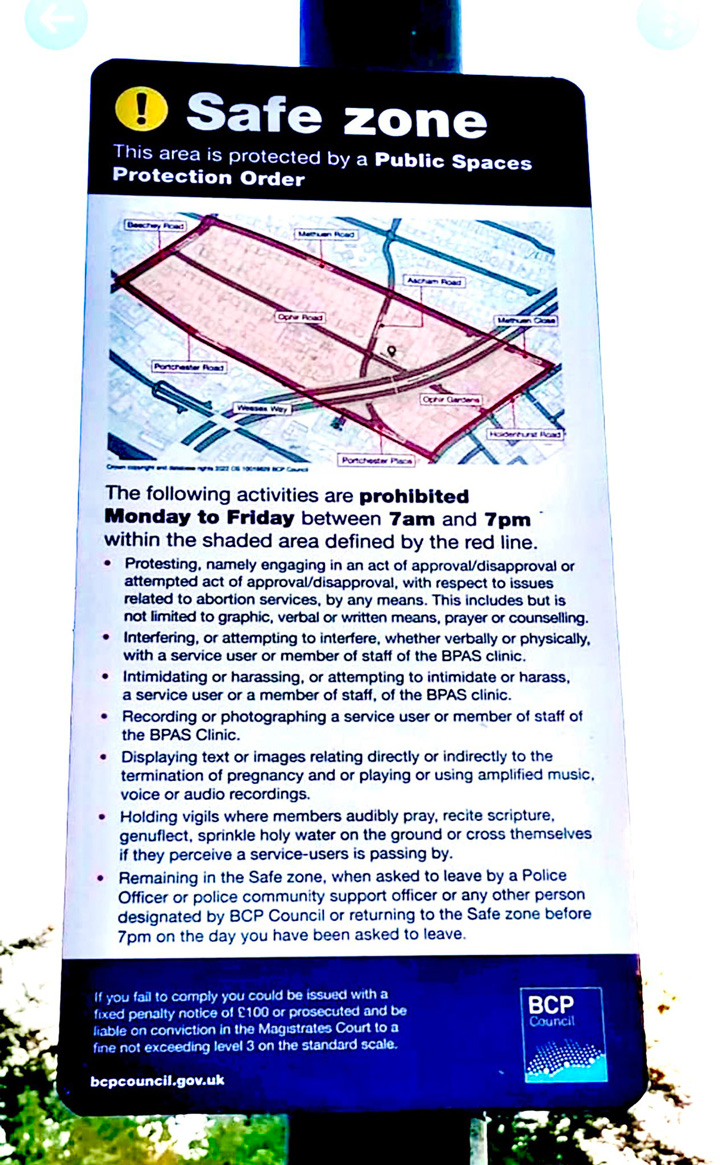 Earlier this month a sobering milestone was passed. There have now been over 10 million abortions in the UK since abortion was legalised in 1967. That is a staggering number. We have ended the lives of 10 million babies. That is almost twice the population of Scotland. Half the population of Hungary. More than the entire population of London. Millions of people would be alive today if abortion had not been legalised.

Now, instead of lamenting this loss of life we are industrialising it, making it ever easier to obtain abortion effectively on demand, and now planning to criminalise dissent. Most MPs believe that offering to help a pregnant woman near an abortion clinic should be a criminal offence. This is totalitarianism. It is brutal, it is bloody, and it will not tolerate any disagreement.

The ugly brutality of the abortion industry needs to be exposed and confronted. How many stories of grateful mothers who are so glad they were persuaded against having an abortion do we need. How many heartrending stories of abortion regret do we need? What will touch the hearts of the heartless? Who will speak for the voiceless? We must speak out about the horrors of abortion while we still can.