Govt asks 6-year-olds to tell them their ‘gender identity’

In April, the new Children’s Commissioner for England, Dame Rachel Da Souza, launched ‘The Big Ask’ where children were to be encouraged by schools to engage with an online survey of their views. This was a laudable attempt to find out the feelings of children across the nation.

However, as part of this process, young children were asked to explain, “A little about you- The following questions will ask you more about yourselves.” 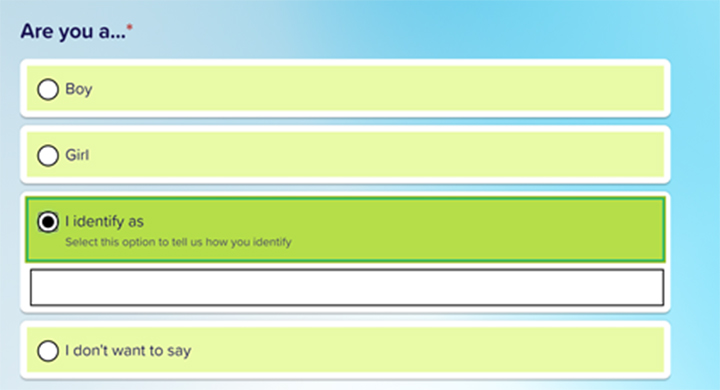 The form asks children from the age of 6 whether they are a boy, a girl, or what else they might identify as. Giving young children the opportunity to decide if they are a boy or a girl, and requiring them to do so outside the biological reference points of boy and girl, is becoming more and more common in our schools. And here, in the government’s national survey, completed by half a million contributors, we have, front and centre, the normalising of progressive ideology through schools. The presence of this question demonstrates an encouragement into a process of gender questioning  and potentially gender dysphoria in the very young.

Children, or sons and daughters?

The UNCRC is referenced regularly in the ‘Big Ask’ information and in resources sent to schools to share with staff and pupils. The PowerPoint slides provided to teachers for young children, present a persistently gender questioning approach, beyond what would be necessary to simply explain that children could play with different toys if they so wished. The associated documents continually reference the ‘rights’ of the child, without consideration for the place of the parent.

As many commentators have noted, parents’ primary role as the main provider of love, identity and support is being denied. It is subverted by the UNCRC in its own statist assumptions where children are often seen as best educated and defended by the state alone. Transgender ideology, and self-identification is now being encouraged to the youngest, and being declared as a ‘right’ to be supported by the state- and all outside the authority and care of parents; parents who know and love their sons and daughters.

In our ‘progressing’ world, to not allow your 6-year-old the choice to self-identify as an alternative gender would now be seen as an infringement on their rights. Given the endemic confusion in professional bodies and states, Article 8.2 is being disturbingly interpreted: ‘Where a child is illegally deprived of some or all of the elements of his or her identity, States Parties shall provide appropriate assistance and protection, with a view to re-establishing speedily his or her identity.’

There is an unhelpful attitude being formed by agencies from an understanding that identity is not found from within family. And this attitude about sexual and gender identity is being endorsed in schools up and down the country through harmful and confusing RSE resources and now even in this kind of national survey.

As the commissioner herself states, “I hope that every parent and carer, every teacher and anyone who works with children will encourage children to take part in this big, exciting opportunity. I want ‘The Big Ask’ to be the biggest survey of children ever carried out in this country…”

Every 6-year-old child had the opportunity to express their own gender identity. The commissioner writes:

“I want ‘The Big Ask’ to be the biggest survey of children ever carried out in this country so that we can better understand what children want from the people in power and those who make decisions about their lives.”

And it has been.

We must understand that, ‘What children want from people in power’, is shaped by what the most significant adults around those children will influence them to ‘want’. It is ridiculous to assume that young children are independent of this teaching, and opening up opportunities to explain questions on ‘gender identity’ clearly moves the children to uncritically accept what many would see as a confusing, dangerous and harmful worldview.

Thankfully, many schools have had far too much to focus on given the pandemic, to be able to promote this survey. However, around half a million have engaged with this survey, potentially opening up conversations about gender identity with very young children. As the recent Bernard Randall case shows, the aggressive and subversive agenda of transgender ideology is becoming more and more of an influence in state and independent schools across the UK. Parents must be vigilant, and the Church must speak out, or the freedoms to pass on a Christian worldview of identity and gender will pass into history.