A Christian woman who was attacked and stabbed multiple times by a man in a black Islamic robe at Speakers’ Corner in Hyde Park, London, has spoken for the first time since the incident.

Hatun Tash, 39, a well-known Christian preacher who regularly critiques and debates the Qur’an at Speakers’ Corner, the most famous place in the world for free speech, was attacked at 3.34pm on Sunday 25 July.

Hatun is an ex-Muslim who has converted to Christianity and is the director of the ministry Defend Christ Critique Islam (DCCI). It is well known that those who convert from Islam are deemed to have committed apostasy which, according to sharia law, deserves the death penalty.

Shocking video footage from Sunday’s incident has revealed a man clad in black, with a hood and face mask, unleashing a series of violent stabs at Hatun’s throat and body which left her with wounds to her face and hands. Hatun collapsed with blood down her face and is seen wearing a Charlie Hebdo t-shirt. Following the attack, the man immediately fled the scene and discarded the knife. 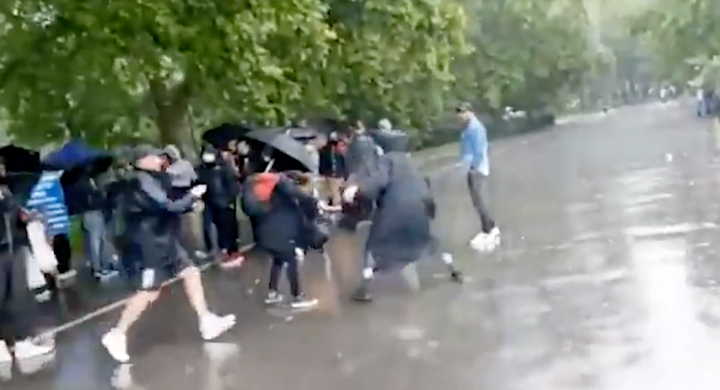 Only moments earlier, Hatun, who is being supported by the Christian Legal Centre, had been quietly speaking to another member of the public and was not preaching.

She was treated by the London Ambulance Service and was then taken to a central London hospital where her wounds were stitched.

Despite a police car appearing immediately, police failed to catch and detain the attacker and have now appealed to the public for further evidence. Counter-terrorism are now also investigating.

‘I can’t believe this has happened’

Responding to the attack, Hatun said: “I am upset and disturbed by what has happened to me. I am asking myself if I have done anything wrong? I am convinced I have not broken any law or incited hate. All I did was question Islam and I wanted to debate, discuss and to tell people about Jesus Christ. Speakers’ Corner is a great place to do this, it is a shame that this has happened at the home of freedom of speech.

“Watching the video, the intention is clearly to kill me.

“I can’t believe this has happened in broad daylight at Speakers’ Corner. You do not expect such things to happen in Great Britain.

“Police inaction has led to what happened to me yesterday. In the past, they have seen it as easier to remove me than deal with people intimidating and threatening me. My attacker was not even afraid of the police as he did it right in front of them. It is heart-breaking that we live in a society where police do not want to arrest a Muslim for fear of being called ‘Islamophobic.'”

The incident is the latest in a series of concerning events at Speakers’ Corner involving Hatun.

Prior to Sunday’s incident, the Christian Legal Centre had already filed a pre-action letter with the London Metropolitan Police seeking damages on Hatun’s behalf for assault, false arrest, false imprisonment and harassment as a result of the repeated failures to protect her.

Disturbing incidents and threats to Hatun have been escalating at Speakers’ Corner since September 2020 when footage emerged of a threatening Islamic mob surrounding Hatun which resulted in her receiving death threats. Further incidents, outlined in the pre-action letter, have involved Hatun being slapped, punched and knocked to the ground by Islamic men.

Police have repeatedly failed to protect Hatun or make any arrests following her being assaulted and threatened. Instead, she has experienced being arrested, detained overnight in a police cell and had her belongings searched humiliatingly in public.

The Free Speech Union has also written to Metropolitan Police raising concerns over her treatment.

The story comes following protests and death threats about the Batley Grammar School teacher who is still in hiding and fearing for his life after showing a Charlie Hebdo cartoon to his pupils.

‘Freedom hanging by a thread’

Andrea Williams, chief executive of the Christian Legal Centre, commented: “What happened to Hatun Tash at Speakers’ Corner was harrowing. Sharia law is being implemented there by the back door and Sunday’s incident is a serious escalation following a series of concerning episodes.

“Speakers’ Corner is the embodiment of freedom, that is unlike any other place in the world.

“Our freedom is hanging by a thread – if Hatun is silenced by violence at Speakers’ Corner, then we are all silenced.”

Find out more about Hatun Tash
View other articles
|