School cancels support for Samaritan’s Purse after one complaint

An independent school with an evangelical ethos has cancelled its support for a charity providing emergency humanitarian support in Ukraine after one complaint about its Christian beliefs on marriage.

Samaritan’s Purse holds to biblical beliefs, shared by the mainstream churches across the world on human sexuality and biblical marriage.

Other parents have described the move of the fee-paying college as a: “betrayal of Christian children and parents at the school.”

However, on a web page created by the complainants, which has since been deleted, the parents, who are being supported by Humanists UK, said: ‘It’s time for the school to change, not us.’

St Lawrence College, whose charitable objectives include a commitment to evangelical beliefs, had started supporting Samaritan’s Purse OCC programme in 2021.

The humanitarian and evangelical initiative describes itself as showing: “God’s love in a tangible way to children in need around the world, and together with the local church worldwide, to share the Good News of Jesus Christ.”

Since 1990, more than 186 million children in over 160 countries have experienced support through OCC.

In March, in response to the Ukraine crisis, Samaritan’s Purse delivered some 660,000 Operation Christmas Child gift-filled shoebox to the country, in partnership with more than 3,200 churches.

They also carried out their fifth airlift to Ukraine carrying more than 19 tons of relief, including medical supplies for area hospitals for the country’s suffering medical system.

They have also set up an emergency field hospital in the Ukrainian city of Lviv as millions of refugees flee West following the invasion.

The organisation is led by world-famous evangelist, Franklin Graham, who is the son of the renowned evangelist, Billy Graham.

The complainants, however, describe Franklin Graham as ‘homophobic’ and the College’s support for Samaritan’s Purse ‘disturbing’. Furthermore, they allege that anyone who shares their beliefs are a ‘danger to children.’

The college had supported the OCC with the backing of its charitable objects which state that the objects are public benefit to provide, maintain and promote sound public school education on a religious basis in accordance with the scriptural and evangelical doctrines and principles of the Church of England, as declared in the Thirty-Nine Articles.

The Church of England’s official doctrine on marriage continues to be that marriage is the exclusive union of one man and one woman for life as seen in its public liturgy, especially the Book of Common Prayer, and Canon law.

The complainants were initially told by the College that the views of Samaritan’s Purse are not illegal and that their objectives are in line with the College’s “mission as an Evangelical Christian foundation”.

However, after persistent pressure and despite the College dismissing the complaint at the first two stages, the College released a statement in March which said:

‘The College chose to support Operation Christmas Child – a charitable scheme which involves filling shoe boxes with gifts and sending them abroad to benefit disadvantaged children.

‘The College carried out due diligence on Samaritan’s Purse… and believed its values were in line with the College’s Christian ethos. We now accept our research, which was conducted in good faith, did not give sufficient consideration of the wider potential impact that supporting Operation Christmas Child may have on the existing College community, or a proper assessment of the charitable purposes of Samaritan’s Purse. We have therefore decided not to support this charity in future.’

The statement went on to reference how Samaritan’s Purse is opposed to same-sex marriage, and that: ‘Whilst it is important to respect the right to freedom of expression and the right to freedom of thought, conscience, and religion within the bounds of the law, it is also important to be clear that such views are not in line with a school where pupils can be themselves and are respected and celebrated for who they are.’

The statement concluded by saying: ‘We recognise that teaching across our curriculum and our pastoral care should respect and reflect the diversity in today’s society, and the importance of equality in our society and institutions.’

Ironically, the college is named after Saint Lawrence, who is the patron saint of school children and poor people who was martyred for his Christian beliefs in second century Rome. 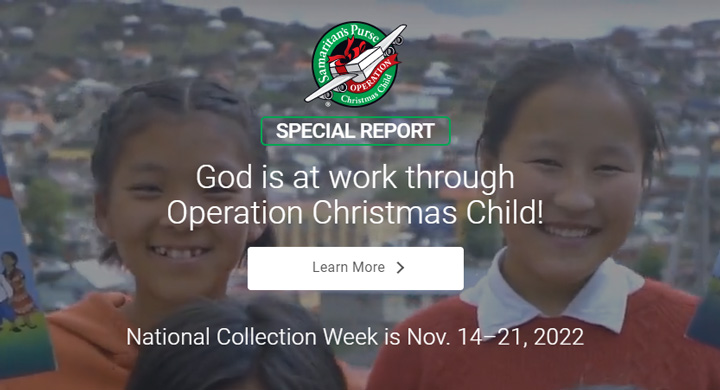 One parent, who wished to be anonymous, said: “I feel very let down as the school has failed to stand with Christian children and parents on this issue. It is a betrayal of the purpose for which the College was founded.

“Many Christian parents, especially in Africa, have spent vast amounts of money sending their children to board at the school because of its Christian ethos. They would expect their children’s faith to be respected and not for support for a charity to be dropped on these discriminatory grounds.

“The school is trying to have a foot in both the secular and Christian world, which just won’t work.

“If the school does not reverse its decision, it will embolden the complainants and the governors who support them to go further.”

Andrea Williams, Chief Executive of Christian Concern, said: “This school has an amazing history linked to its Christian roots and has sadly bowed the knee to pressure from a small minority pressure group – Humanists UK.

“How sad to see a Christian school, with such an amazing heritage, pressured into abandoning its support for one of the most effective emergency relief organisations in the world just because it won’t water down what it believes in.

“Humanists UK is a militant organisation waging war on Christianity in schools with a stated aim to “eradicate faith schools”.

“Franklin Graham is a man whose faith drives him to serve the poorest and most in need across the globe. What he has achieved through Samaritan’s Purse is nothing short of miraculous. He’s a faith hero just like his father Billy.

“This is another in a long line of cancel culture stories where the pressure of an ideological LBGT lobby has forced people in charge into submission because they are scared to resist. This has to stop.”