A Christian charity leader has been given the first lockdown related compensation award from Dorset police after being manhandled and unlawfully prevented from preaching on the back of his truck.

With thanks to support from the Christian Legal Centre, police have now paid street preacher Dominic Muir, 44, £1,250 in damages and costs.

In recorded footage, Eton educated Dominic Muir, a chief executive of registered Christian charities Now Believe and Jesus Fields, can be seen standing on the back of his truck on a mostly deserted street in Blandford Forum town centre in Dorset on 22 April 2020. In the footage, Dominic begins by singing and preaching from the Bible with a microphone.

After singing Amazing Grace, Dominic began a short message. However, after eight minutes, he was approached by a police officer.

The officer spoke in general terms about lockdown restrictions, told Dominic he was not allowed to preach or sing and stated: “I am going to have to move you on.”

Dominic told the police officer that he had the right to preach in public even during lockdown and the policeman said: “I am going to need you to produce some paperwork to say that you are allowed to do that here”.

Dominic politely said that he needed five minutes to give his talk. The policeman reluctantly relented but emphasised that he had a limited amount of time to preach.

After preaching for three minutes the officer shouted: “Time’s up!” Within seconds he mounted the truck, broke social distancing rules, and grabbed Dominic by the left arm without any warning.

Dominic asked the officer to remove his hand from his arm, then put away his equipment and was forced to leave the area.

During the course of the lockdown, Christian ministry in general was treated as non-essential by the UK government, which led to a wave of police clampdowns on street preaching, and even some Christian homeless ministries. 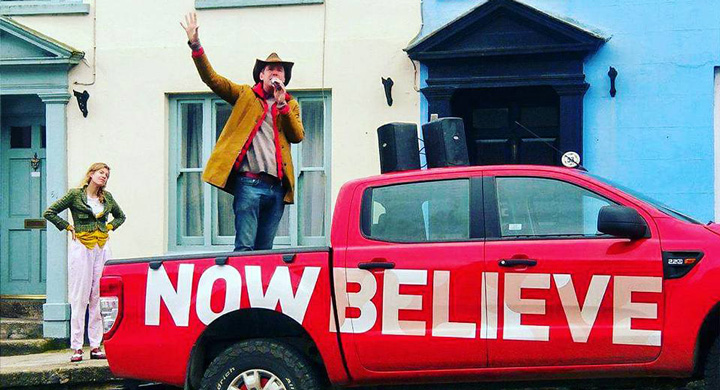 Intention was to harass

Following the incident, Dominic sought help from the Christian Legal Centre, which assisted him with a pre-action letter to the Chief Constable of Dorset Police, seeking compensation for the police assault.

In the letter, lawyers argued that Dominic’s microphone was in his right hand when the officer had grabbed him, and therefore the intention must have been more than simply preventing him from preaching.

Furthermore, lawyers argued that the officer’s sole intention was to stop Dominic from exercising his legitimate right to free speech, which was not prohibited by the Covid Regulations.

In response, Dorset Police have now admitted that the officer acted unlawfully, and have paid £1,250 in damages and costs.

Responding to the settlement, Dominic said: “It was intimidating and humiliating to be confronted by the police in this way and treated as a potential criminal.

“I have no doubt that if I had continued to preach or sing, I would have been handcuffed, arrested and taken to the police station.

“During the pandemic I have honoured social distancing, but I also have a legitimate job to do, which is to preach the gospel.

“For centuries, street preaching in the UK was an honoured profession that was respected and deemed essential to people’s physical, emotional and spiritual well-being.

“To be shut down by the police like this represented a huge shift for me and shows the extent of society’s secularisation.

“My hope going forward is that there would be a respect accorded to Christian ministers and charities that seek to bring hope to those in desperate situations whose greatest need is their spiritual need.”

Andrea Williams, chief executive of the Christian Legal Centre, said: “Christian ministry in church or on the street should never have been deemed as ‘non-essential’ nor as a problem which needed to go away during lockdown. This must never happen again.

“Dominic Muir had not broken lockdown restrictions. He was singing and preaching about the hope of Jesus Christ on the back of his truck at a time of great uncertainty and need for many.

“We welcome that Dorset police have recognised that they acted unlawfully. We call for greater respect and understanding from the police to street preachers now and beyond the pandemic.”

Find out more about Dominic Muir
View other articles
|