The inception of deception – pray for Elliot Page

Steve Beegoo, Christian Concern’s Head of Education, advises on how parents can best speak to their children about their true identity.

Elliot Page, previously known as Ellen Page, is an actor who came out as transgender in December 2020. Having painfully struggled with gender dysphoria, the actor recently spoke to Oprah Winfrey in a widely watched, emotional and influential piece. The actor has now completed the best medical transitioning which money can buy, including ‘top surgery’, a euphemism for a double mastectomy. This is described in the interview as life-saving. As the star of such movies as ‘Inception’, ‘Juno’ and the ‘X-Men’ franchise, and also the highly acclaimed ‘Umbrella Academy’, Elliot has a huge following.

What we see in the video is someone who admitted their desperate struggle for identity and security. And Elliot’s solutions are completely consistent with the worldview to which so many now align. As the influential Saul promoted his worldview across nations, through the most persuasive means of his time, so the media methods of new beliefs and ideologies are presented with little critique to a waiting young audience. As the powerful Saul was changed to Paul as he met Christ, so may we pray for Elliot and all those living inside a story and belief system, which has no ultimate power to bring the freedom they really seek to save their lives.

The emotional account, with the sympathetic Oprah, gives an impression of a life ‘saved’, through the acceptance of gender identity beliefs and the miracles of science.

Let us examine this narrative, so we may understand and graciously, but clearly, explain to our children and young people Biblical truth.

The creation, fall, redemption and New Earth Biblical narrative, with the resurrection of Jesus Christ at its heart, is the gospel which we must learn to communicate. 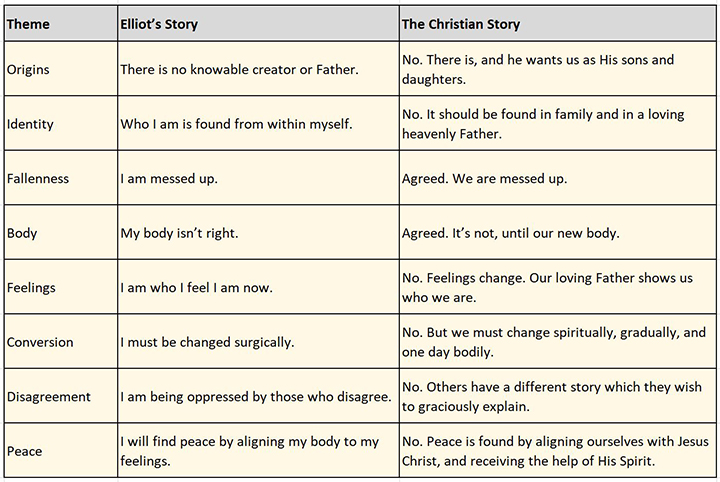 Elliot’s solutions to solve the painful struggles of deep gender dysphoria are totally consistent with the worldview from which Elliot’s story is based. We see here the fruits of the deceptive ‘gospel’ of radically liberal Western society, which is said to bring freedom to the autonomous self-identifying individuals of society. We must tell the Christian gospel, the story of a crucified Saviour who will put the world to rights, and every person who aligns with Him. He will put us right; body, soul and spirit. We must invite our children and young people into this narrative.

In Christopher Nolan’s psychological thriller ‘Inception’ the protagonists seek to implant ideas to change the decisions of individuals, so deceiving them. Ideologues understand that if they can plant the ideas of gender identity in the young, through framing the ideas as a fight for equality and social justice, then they can succeed in subverting a Judaeo-Christian worldview, which they see as oppressive.

If you are a parent, consider which aspects of the Biblical narrative are most important for you to make clear to your sons and daughters. We explain these things not just with words, but by modelling these truths in our love for those God has given to us to steward for Him. If you can encourage them into the security of being a loved, created person, who is uniquely able to know God’s love, and uniquely able to give love to God, their sense of origins will be strong.

If you can avoid the constant ‘you are totally wonderful as you are’ rhetoric, and lovingly explain the messed up character and nature that you as a parent are also struggling with, then fallenness becomes something your children joyfully submit to Him, as you also submit to Him. No fears of punishment for not being good enough, but an understanding of salvation and sanctification.

If you can help them understand that there is an end to the story, with a New Heaven and a New Earth, with new bodies and a resurrection of everything, then the ultimate hope and peace of the gospel of Jesus Christ can orientate their trajectory in the journey of life before them. A journey into an eternal identity.

Children will be being exposed to the opposing narratives of gender identity at younger ages. Elliot expresses in the interview how positive childhood transition can be and we see more and more schools, aligned with those in the media, promoting that children’s lives will be ‘saved’ if they are welcomed into a life of transitioning from a young age.

May the deception of the prevailing worldviews be exposed. There is a true story, and a true happy ever after where lives are saved eternally.

Parents must model a compassionate approach, never reacting with disgust, but prayer. Pray for your children. Pray for our young people. Pray for Elliot, and all those desperately seeking a story which will bring them true peace.