Speakers’ Corner is known as the home of free speech. Yet a brave Christian preacher has once again been arrested there because she was being critical of Islam. 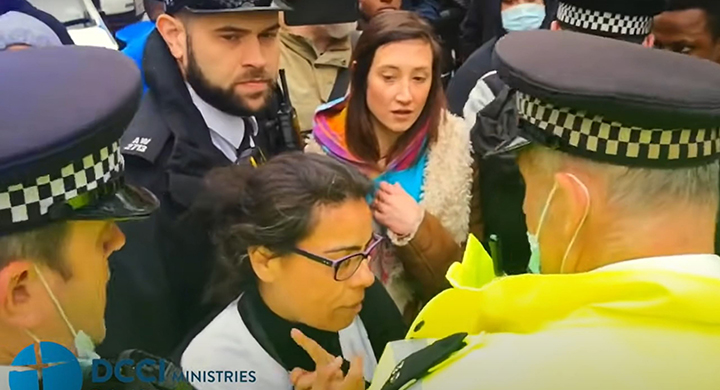 Hatun Tash is a regular feature at Speakers’ Corner. Just last September she was escorted out of Speakers’ Corner by police; again, because she was being critical of Islam. Hatun has been warned that there are Muslims who want to kill her and that it is therefore dangerous for her to attend Speakers’ Corner. But Hatun is not intimidated or cowed. Even though she has been assaulted there before, she continues to preach there every week. She feels called to preach to the Muslims there and she is very effective in her ministry.

Hatun’s style is provocative. Deliberately so. This is how she attracts attention and gets people to listen. In September, the offending item was a copy of the Qur’an with holes drilled through it as a visual aid to point out that there are holes in the narrative around the Qur’an. As I pointed out then, no other book with holes in it would cause any problems or be seen as beyond the bounds of free speech. Only if we are effectively enforcing sharia law would we prohibit display of a Qur’an with holes in it.

Last Sunday she was wearing a T-shirt with a cartoon of Mohammad on it. Cartoons of any other figures would be clearly within the bounds of free speech. Only if we are effectively enforcing sharia law would a cartoon of Muhammad be prohibited. This is the home of free speech after all.

Home of free speech or not, Hatun was arrested, carried into a police van to cheers by the Muslim mob. She was held overnight in a police cell, before being released without charge. You can watch a video of the arrest here.

Capitulation to the mob

In the video, it is clear that there is a group of aggressive Muslims who are threatening Hatun. They are doing so right in front of the police officers. The police response is to arrest Hatun and take her out of the park. But she has committed no offence. After the arrest, a police officer talks to one of the Muslim protagonists who suggests to the officer that he has recognised that wearing that t-shirt was a breach of the peace. The officer denies this and explains (from 2:58):

Officer: She was here, and causing trouble. There’s one of her, and fifty-odd of you. So what we do is we take her from the situation. That’s what we’ve done.

Muslim: Appreciate that man, thanks.

Earlier the same Muslim man had challenged Hatun to go to France and wear her t-shirt.

At the start of that video, a man called Mohammad Hijab tells the police to “go away” and “get out of here.” 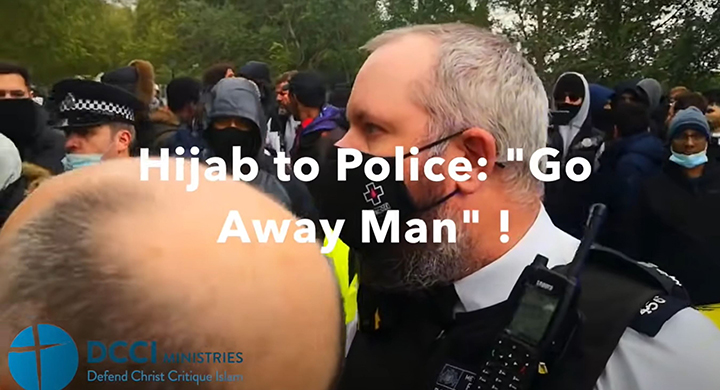 Hijab has a large following on YouTube. On the same day he posted a video of himself preaching in Speaker’s Corner criticising world leaders for saying that Israel has a right to defend itself and saying we shouldn’t be shocked if some Muslim “blows himself up in the next couple of weeks.”

“I’m not going to be shocked if I see that. I’m going to expect it. I’m not going on trains. You’re putting your own populations in danger.” 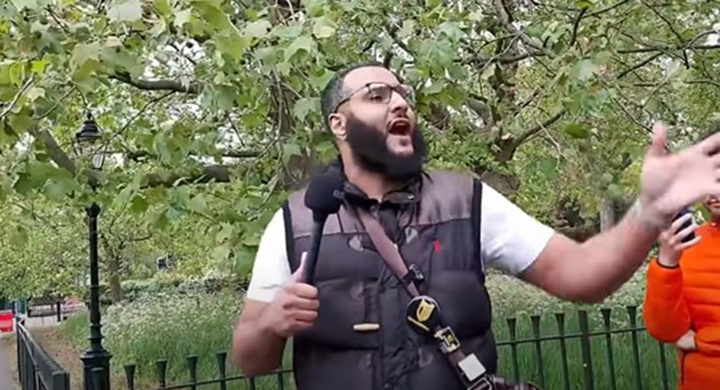 Earlier the same day, Hijab was involved in a pro-Palestinian counter-demonstration against the rally for Israel and for peace. In this video he can clearly be seen being antagonistic. Hijab referred to some Jews as Zionists and threatened to a police officer that he would kill their dogs if he saw them again (from 0:57). 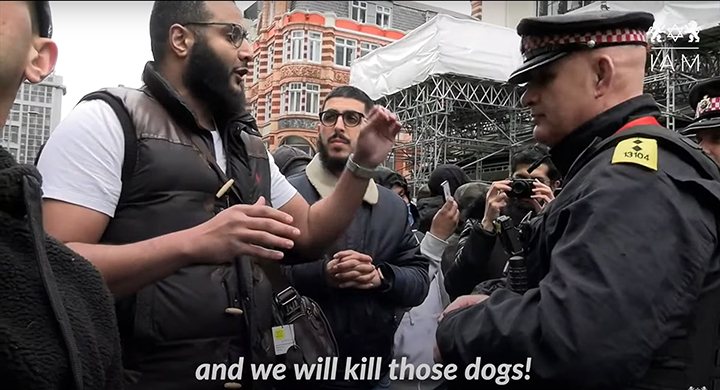 This mob had thrown bottles and eggs at some Jews who took a wrong turning and ended up mixed in with the Islamists. 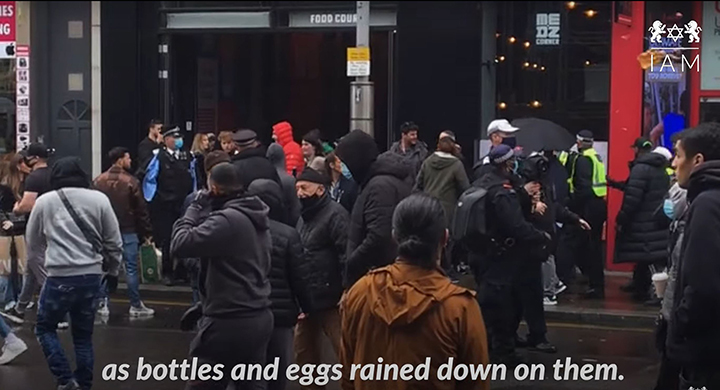 Hijab then led the Muslim antagonists to Speakers’ Corner.  A member of the mob openly said in front of police officers: 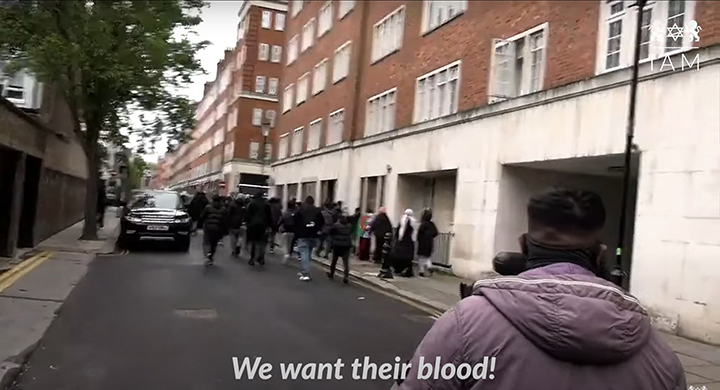 Hijab is seen saying: “We believe that life begins at death. We don’t care about death. We love death!” 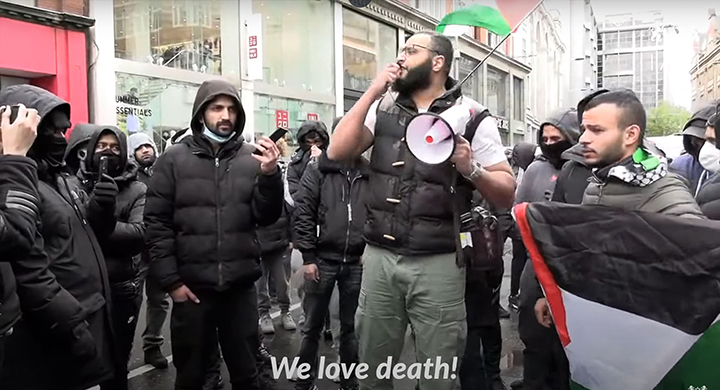 These same people were in the mob which then threatened Hatun. The police did not arrest the antagonists – they arrested Hatun who had made no threats and committed no offence.

The police are meant to operate without fear or favour. This is clearly no longer the case. Where there’s a mob, the police don’t dare to step in. The person being threatened is arrested, not the members of the mob. The one who has committed no offence is kept in a cell overnight. The threatening mob get their reward and go free. This is how law and order break down.

Unless police policy changes, these mobs will enforce sharia law in more and more areas. This is how Speakers’ Corner becomes Sharia Corner.