Sounding the warning and bringing hope to Colombia

I write this to you from the overnight flight from Bogota, Colombia. I have spent the past five days with pastors, lawyers, educators, media folk, all of whom have a heart for their country. 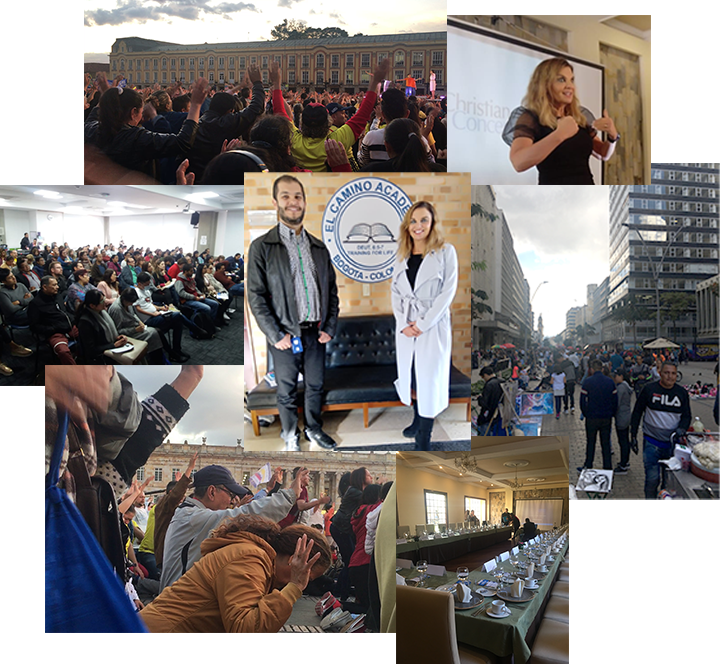 It is my second time to Colombia in two years. Last year I spoke at a pro-life and pro-family conference which had gathered hundreds from across the nation. It was evident even then that the country was in being taken in by a culturally Marxist agenda. But those willing to speak up for Jesus had reached out for help.

This visit was the follow-on meeting and the burgeoning network of activists, bringing together men and women passionate about Jesus and the proclamation of His Truth at the heart of society in Colombia. It was a privilege to be able to share my experiences with them, to teach them how we in the UK have succumbed to a ‘progressive agenda’ and are seeking to put Jesus back at the heart of society.

I was humbled by the love of these men and women for me and for the work of Christian Concern. Men and women who follow closely everything we do in the UK.

In Colombia, it feels as if corruption and poverty are ‘in the air’. It is against this backdrop that a ‘progressive agenda’ is being foisted upon the people, often in exchange for big bucks – the push to liberalise laws around marriage and life issues creeps in because the political and church structures are trying to deal with so much else and have no structure to counter them.

The counterbalance in all this complexity is a warm, vibrant, Latino people and an openness to Jesus. The counterbalance is one extraordinary testimony after another of miraculous encounters with Jesus Christ as Lord and Saviour.

I was met at the airport by an ex-guerrilla. The journey to the guest house where I was being hosted was replete with how Jesus had turned not just this man of violence around, but how Jesus had made beautiful his marriage and family. He now works on the pastorate team of one of the largest evangelical churches in Colombia.

Who can see an end to guerrilla warfare? Jesus.

The first night, there were eight or so of us gathered in a small room. Each of these men and women were leaders in their spheres of influence – church, law, media, politics, education – and each one determined to formalise their informal but effective movement to resist the radical ‘progressive’ agenda being foisted on their country.

Friday morning, I needed to be ready by 6am for a 7am business breakfast. I was taken to a government building and had the enormous privilege of addressing forty lawyers, politicians, pastors and various Christian organisations on the impact of legislating against God’s good pattern for the welfare of society and my lived experience of the past thirty years seeking to counter such legislation in our nation.

I remained with this group for the rest of the morning and then travelled to a Christian school on the outskirts of Bogota. This had been founded by American missionaries. I was thrilled to speak to the whole of the upper school – stunning, engaged young people.

As I spoke with the staff afterwards, I encouraged them to be bold in keeping King Jesus at the heart of their education; I encouraged them to face head on the culture their children were living in and to resist any societal or government pressure to weaken their Christian worldview in all aspects of education. I lamented how in the UK, we had handed most of our Christian schools over to the state and that we had allowed regulatory bodies and societal pressure to mould education, robbing our children of the Truth and confusing them about who they are and what they are made for.

The following day I returned to the school where I spoke to over one hundred head teachers and pastors with the same warning.

On Sunday – oh what total joy to speak at a church in the heart of the military zone of Bogota. I passed through barbed wire to reach the location, and there met a beautiful pastor (former military) and his wife who had been faithfully ministering amongst the military for decades. I was so moved and thrilled again to witness the vibrancy of knowing Jesus. Wherever I go in the world, I meet men and women that know Him and love Him. How can this be explained? Only one answer – He is True.

And then we celebrated my host, Carmen Gallego Cano’s  birthday in central Bogota – pancake and waffles. Then through the streets where she danced salsa.

And then to the central square, on one side the cathedral and on the other the mayoral building of the newly elected mayor of Bogota. She is a lesbian in a high-profile relationship with another politician, and together they are pursuing a radical ‘progressive’ LGBTI agenda. Thousands of Christians had turned out onto the streets and into the square to pray for their city and their nation. I was proud to pray with them – proud to be with politicians who resist. They loved, they cried, they got on their knees, they pleaded for their land. And I was humbled.

Monday was a full-on strategy day: in the morning with intercessors and in the afternoon with the lawyers. Every story is a God story: I met a judge who’d sought political asylum in America for 12 years because he and his wife had exposed corruption – God called them back to Colombia and now he wanted to resist the new agenda. We also connected via Skype to Washington DC where we spoke with a stunning and brave young woman who, whilst seeking justice in cases of violence and corruption in Colombia, has now paid a high price for standing up for them and for Jesus Christ in the UN.

And now I am coming home.

May the Lord do a wondrous work in Colombia. May Colombia and Latin America hold fast to Jesus. Here’s to Christian Concern Colombia (or whatever they might choose to call their new movement).