The Scottish Government and the Scottish Police, under the banner One Scotland, are running a hate crime awareness campaign. The campaign consists primarily of posters addressing ‘Bigots’, ‘homophobes’, ‘transphobes’, and others, and signed ‘Yours, Scotland’.

David Robertson highlighted this campaign on his blog last week, with the title “The ‘Hate’ Police are Now Here”. He followed this up with another blog about how he has reported Police Scotland and the Scottish Government for a hate incident for displaying these posters.

Who could disagree with wanting to crack down on hate crime? Whilst the aim of One Scotland to reduce hate in Scotland is laudable, there are several serious problems with these posters. I thought it would be helpful to elaborate some of our concerns.

The Police and the Crown Prosecution Service (CPS) define a hate crime in the following way:

This is a very problematic definition because of the emphasis on subjective perception. Anyone can say that they perceive a crime to be motivated by hate and that settles it as being a hate crime in law. Furthermore, the website also states that verbal assault can be classified as a hate crime. The Scottish definition has a slightly better wording, but it amounts to the same thing.

In our view, it does not help to classify some crimes as ‘hate crimes’ and others as ‘crimes’. All crimes are crimes, and the added element of perceived hate only serves to confuse the issue and to add additional unnecessary complexity.

Is evangelism a hate crime?

Last year Lord Pearson asked the government in the House of Lords whether it could be a hate crime to say that Jesus is the only Son of the one true God, however much it may offend a Muslim of anyone of any other religion. Astonishingly, the government refused to answer his question, leaving the possibility that preaching the uniqueness of salvation through Jesus Christ could be a hate crime.

What is a ‘hate incident’?

The definition of a ‘hate incident’ is:

“A hate incident is any non-crime perceived by the victim or any other person, as being motivated by prejudice or hate.”

This definition goes on to say that a hate incident must be based on any of: race or ethnicity, sexual orientation, religion or belief, disability, or transgender identity.

So here we are into the realms of perception being reality. Anything perceived as motivated by hate of my identity in some form or other can be a hate incident. I could smile at someone across the street and someone else could report it saying they perceived it as a hate incident. The police would duly have to record it since perception is reality.

Police asking for non-crimes to be reported

“In addition to reporting hate crime, please report non-crime hate incidents, which can include things like offensive or insulting comments, online, in person or in writing. Hate will not be tolerated in South Yorkshire. Report it and put a stop to it #HateHurtsSY”

It seems South Yorkshire Police haven’t got enough crimes to investigate so they are keen to get on with non-crimes.

This is an absurd waste of police resources. The whole concept of hate incidents only makes sense in a topsy-turvy Alice in Wonderland type of world where we believe six impossible things before breakfast. In this world a smile could be a hate incident which is reported and investigated by the police. The sooner the idea of ‘hate incidents’ is abolished the better.

Into this fantasy world, where anything can be perceived as a hate incident and therefore reported to and recorded by the police, steps One Scotland with their hate awareness campaign.

The most egregious of their posters contains a very short message:

We are first faced with the question of what a bigot is? The dictionary definition is “a person who is intolerant towards those holding different opinions.” This is a good definition, provided we agree on what intolerance means. The problem is that if someone is very convinced of their own opinion and of the wrongness of other opinions, this can be perceived as intolerance of those holding other opinions.

If this is true for the inoffensive world of mathematical truths, how much more for moral truths. What if I am very convinced that marriage is between a man and a woman? Or that certain behaviours are immoral?

G.K. Chesterton is quoted as saying: “The homeless intellectualism of an unhappy age often uses the term ‘bigot’ for anybody who is sure that he is right and other people are wrong.”

Sadly, I think we are living in just such an unhappy age where being sure you are right is perceived as bigoted.

Are all bigots religious?

This poster assumes that all bigots are religious. This is highly offensive and disturbing. Imagine if the poster had said: “Dear Bigots, you can’t spread your Jewish hate here.” People would rightly accuse them of antisemitism.

What about: “Dear Bigots, you can’t spread your atheistic hate here.” Again, this unreasonably singles out atheists for criticism.

Could you imagine the Scottish government putting up a poster saying: “Dear Bigots, you can’t spread your Islamic hate here.”? I hope not, and neither should they.

The implication is that all religious people are bigots. This is insulting, but it is hard to believe that the insult is not intentional in this case.

The result of posters like this will be to intimidate people into not expressing their views. It is a curbing of freedom of expression. These posters are a form of state intimidation.

What is ‘religious hate’?

What was the intended meaning of the Scottish Government when they mention ‘religious hate’? Given that other posters address ‘homophobes’ and ‘transphobes’, one can assume that they are singling out moral criticism of certain behaviour or lifestyles. Would it count as ‘religious hate’ to say that marriage is between a man and a woman? I am sure this is an intended meaning. What about saying that sex is biological?

Jesus would be guilty

What if I warn someone that without repentance they risk the wrath of God? I am quite sure this could be classified as religious hate. But I am in good company. Jesus did not shy away from criticising certain people’s behaviours and warning them about potential judgement.

Take a look at some of what Jesus said in Matthew 23:

“But woe to you, scribes and Pharisees, hypocrites! For you shut the kingdom of heaven in people’s faces. For you neither enter yourselves nor allow those who would enter to go in.”

“You serpents, you brood of vipers, how are you to escape being sentenced to hell?”

Read the whole chapter. I have no doubt Jesus would be guilty of a hate crime today. People were offended.

Jesus warned that people would not like what we say:

“Blessed are you when others revile you and persecute you and utter all kinds of evil against you falsely on my account.  Rejoice and be glad, for your reward is great in heaven, for so they persecuted the prophets who were before you.” (Matthew 5:11-12)

The fact is that truth sometimes needs to be spoken as bluntly as Jesus spoke it.  Christians should expect to be called ‘hateful bigots’ as this is how people who do not want to acknowledge their accountability to God view those who warn them about this accountability.

The poster closes with “End of sermon.” The reference to a sermon clearly shows that Christians are the target of this poster. It is actually state anti-Christian propaganda, portraying Christians as hateful bigots.

This is where we have got to. The state propagating anti-Christian propaganda. Where next?

The posters claim to represent Scotland. Because they are anti-Christian, they imply that Christians are not welcome, or should not view themselves as properly Scottish. This is further intimidation by the state.

Christian Concern created some posters in response, intended to poke fun at One Scotland, but also to show the serious problems with their posters.  I have also joined many others in reporting these posters to the Scottish Police as a hate incident. 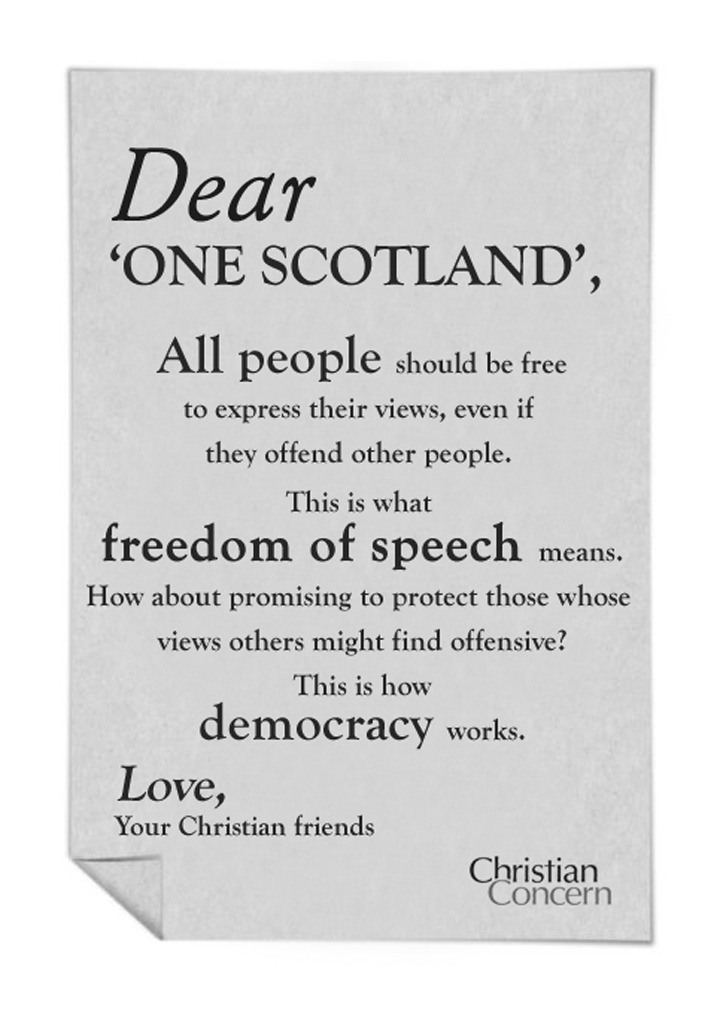 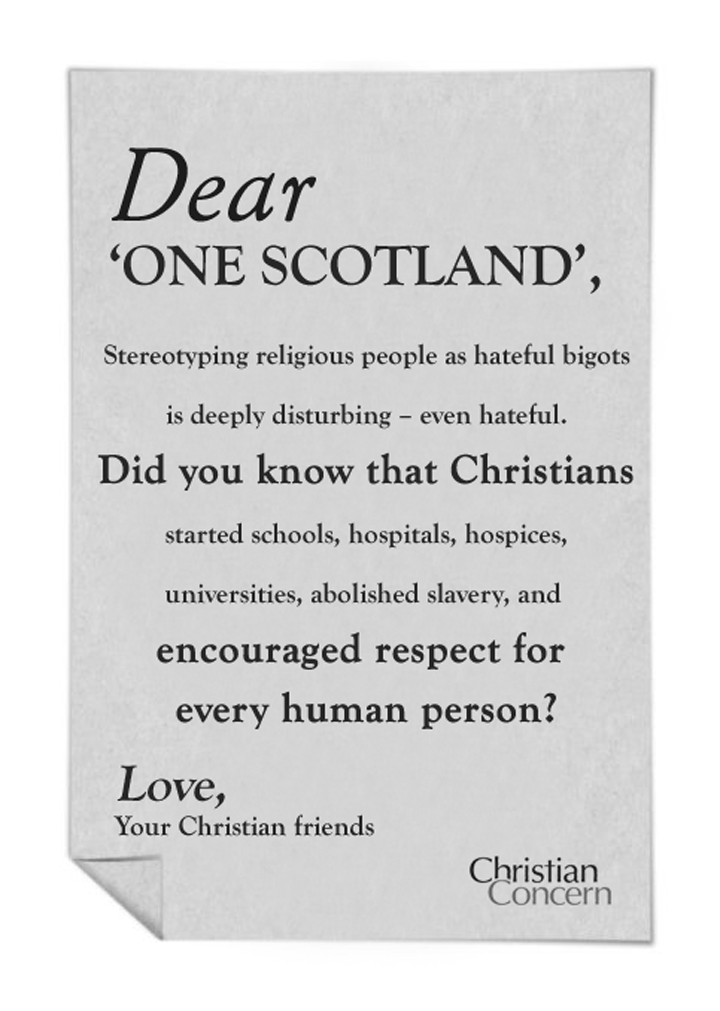 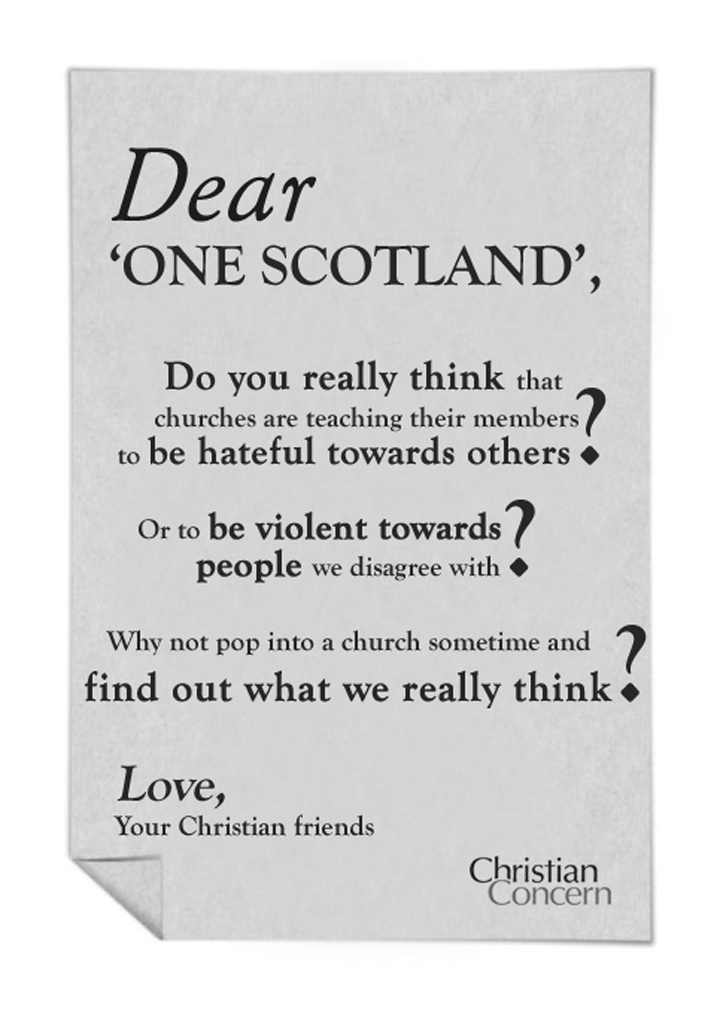 Free speech is a precious freedom which is threatened by One Scotland’s posters. Freedoms not fought for are freedoms forfeited. As was said in an important legal ruling:

“Free speech includes not only the inoffensive but the irritating, the contentious, the eccentric, the heretical, the unwelcome and the provocative provided it does not tend to provoke violence. Freedom only to speak inoffensively is not worth having.”

The government should protect free speech. Threatening and intimidating posters like these undermine free speech. There is no right in law not to be offended. However, now that we have the concept of ‘hate incidents’, people can report things they find offensive to the police, and the police take such reports seriously.

These government posters are a momentous landmark in our current path towards becoming a totalitarian state.