“Yet there’s another side of the company: Its site is infested with rape videos. It monetizes child rapes, revenge pornography, spy cam videos of women showering, racist and misogynist content, and footage of women being asphyxiated in plastic bags. A search for “girls under18” (no space) or “14yo” leads in each case to more than 100,000 videos. Most aren’t of children being assaulted, but too many are.”

Changes are being made

Laila Micklewait, founder of Traffickinghub, described the announcement as “a huge win for the movement” but noted that, “however we need reliable implementation, apologies to victims, restitution for victims & more.”

CEASE UK welcomed the announcement with a “cautious optimism”, noting “major steps in the right direction” but ultimately saying that the measures “still fall short of what’s necessary to ensure that the site is absolutely free from illegal and non-consensual content.”

It is important this cultural and commercial pressure is supported by political pressure. Whilst reform is welcome, we want to see sanctions placed on Pornhub for its negligence in dealing with the horrific content on its website. Additionally, we should call for stricter and proactive regulation, currently there are no adult verification tools in place to confirm the ages of those in the videos, and, of course, pornography is still widely consumed by under-18s. Plans to bring in age verification for pornography were dropped by the government, but there are still calls by some MPs to bring them in in order to protect our children. 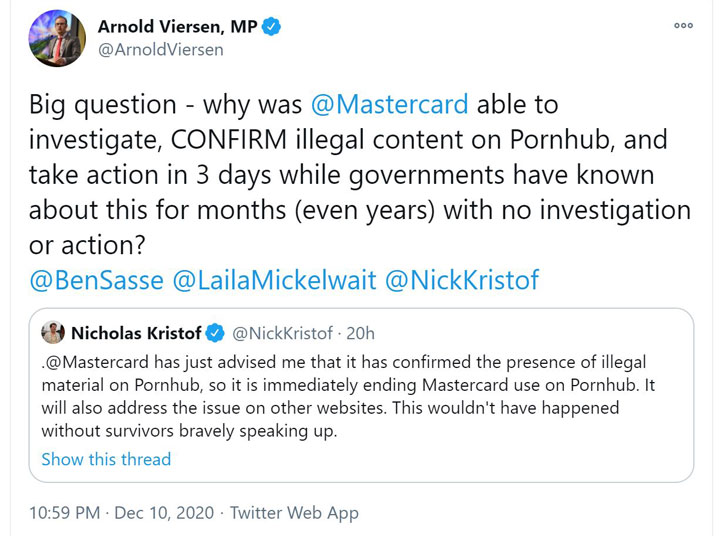 Consent is not enough

Whilst well intentioned, consent is never enough. Sin is sin whether consensual or not, and we must be careful not to fall into a mindset that misunderstands the connections. Naomi Miles of CEASE UK has written on the inherent connections between trafficking, prostitution and pornography.

“Pornography is just prostitution with a camera rolling. The dawn of the internet has led to an explosion in online pornography, thus bringing prostitution to the masses. In prostitution and sex trafficking, those selling sex are objectified, dehumanised and vulnerable. It’s no different in pornography, where women are exposed, stark naked for the sexual arousal and gratification of a potential global audience of millions on anonymous, voyeuristic onlookers who care nothing for their dignity, humanity or well-being.

“The reality is that sex trafficking, pornography and prostitution are inherently interconnected. Human trafficking for the purposes of sexual exploitation is the fruit born of the commercial sex industry, which is deeply rooted within the fertile soil of sexual objectification. We cannot hope to end sex trafficking without uprooting the entire structure.”

We must have a bigger vision for cultural transformation and reformation, that has a better story of hope, love and sex than that is what offered by the world.

“Flee from sexual immorality. Every other sin a person commits is outside the body, but the sexually immoral person sins against his own body. Or do you not know that your body is a temple of the Holy Spirit within you, whom you have from God? You are not your own, for you were bought with a price. So glorify God in your body.”