Of terrorists and Islamophobes: a Christian terrorist?

Christian Concern’s Head of Public Policy, Tim Dieppe, comments on the news that the Liverpool suicide bomber was a Christian convert. 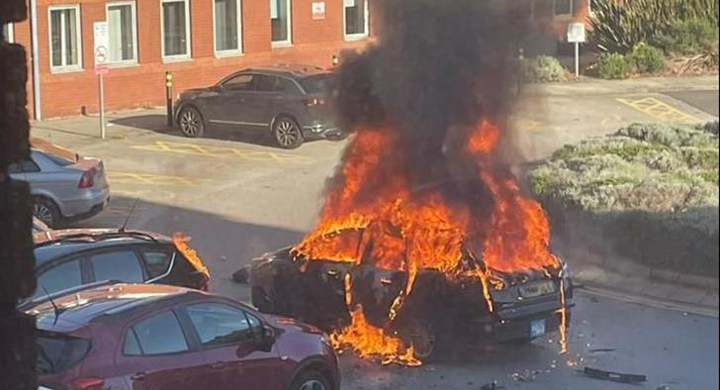 The bomber, named Emad Al Swealmeen, arrived in the UK in 2014 and claimed asylum. His original claim for asylum was rejected because officials believed he was Jordanian, and not Syrian as he stated. He was sectioned seven years ago after trying to kill himself by jumping off an overpass while wearing a knife.

After his asylum claim was rejected, he turned up at the cathedral in Liverpool saying he wanted to convert to Christianity. He attended an Alpha course and was confirmed as a Christian in the cathedral in March 2017. A Christian couple who befriended him, and even took him into their home, were certainly persuaded of the genuineness of his faith at the time. Mr Hitchott is reported to have said: “He was very quiet but deeply moved by faith in Jesus. I used to pray every day for half an hour in the dining room with him. I don’t think he was pretending about his faith.”

Associates, however, said that they believed Al Swealmeen was only interested in converting to Christianity because he believed it would help with his asylum claim. He had made a new asylum claim in 2017. Converts to Christianity can claim that they will be persecuted if they are forced to return to Islamic countries. This is known to aid asylum claims if the authorities believe that the conversion is genuine.

It has emerged that questions have been raised about migrants faking conversions at Liverpool cathedral. Hundreds of Muslims have converted to Christianity after a five-week baptism course. Even people involved in the process have recognised that not all of these conversions are genuine. The Rev. Peter Wilcox, a former Dean of Liverpool, is reported to have said “I can’t think of a single example of somebody who already had British citizenship converting here with us from Islam to Christianity.” Mr Hitchott, who befriended Al Swealmeen, has told an immigration hearing that he was aware that many asylum seekers “pretend to have found Jesus in order to support a false claim for asylum.”

At the same time, those who are genuine Christian converts have faced problems with asylum claims. One case supported by the Christian Legal Centre is that of Reza Karkhah who engages in outreach to Iranian Muslims and translates church services from English to Farsi. The Home Office did not think his conversion was genuine and he risks being deported to Iran which is one of the countries where Christians are most persecuted.

Was he attending church?

There are no reports that Al Swealmeen was regularly attending church following his confirmation. This is a key point. If you’re not an active member of a church, you’re not meaningfully living as a Christian. It is possible that Al Swealmeen came to a genuine faith back in 2017, but it does look suspicious given the asylum motivation and questions about subsequent church membership. If it emerges that he has been a regular part of a church community in recent months, then we can take the claim that he was a Christian more seriously. Otherwise, while he may have been a Christian four years ago, it seems very likely that he was not living as a Christian when he plotted his attack.

Security sources have said that an Islamist plot was a significant line of inquiry, notwithstanding his previous conversion to Christianity. The Times reported that they have not ruled out that Al Swealmeen was inspired by an Islamic State attack. ISIS has previously advised militants to pretend to be Christians by wearing a cross in an English language manual published online. 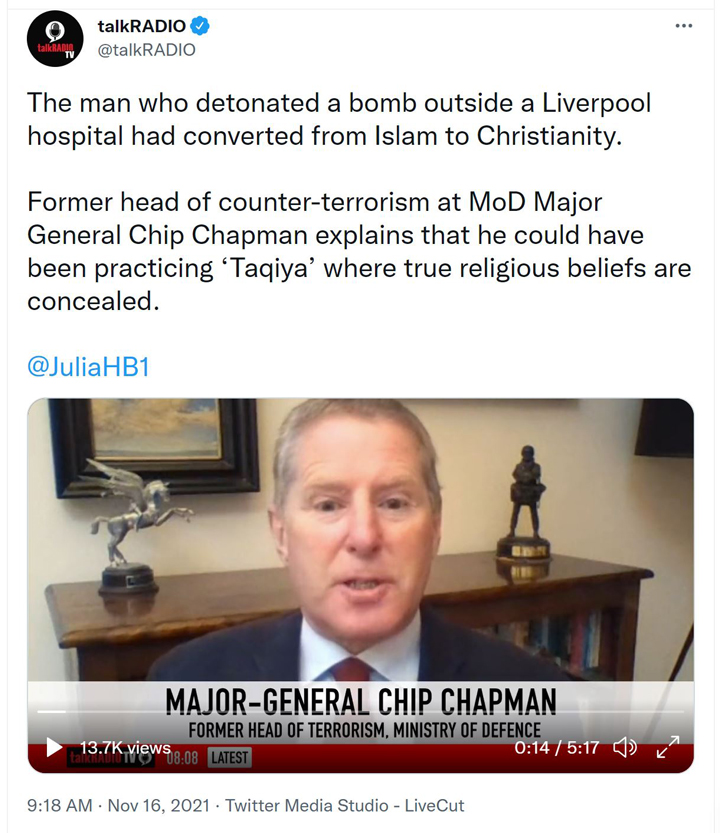 The former head of counter-terrorism at the Ministry of Defence, Major General Chip Chapman, said on radio that Al Swealmeen could have been practicing ‘Taqiya’ – an Islamic doctrine which allows true religious beliefs to be concealed.

Meanwhile, the Joint Terrorism Analysis Centre has raised the UK terrorism threat level from substantial to severe, meaning an attack is highly likely. This is because we have now seen two terrorist incidents in the past month, the brutal stabbing of Sir David Amess inside a church being the previous attack. It is remarkable how quickly that attack faded out of the news. The media avoided referring to Islam as a motivating factor, and MPs shifted the focus to online abuse which was not even a factor in the attack.

I have written before about the serious problems with the proposed definition of ‘Islamophobia’. It is a term that is already weaponised to silence debate about Islam. If we are at all serious about dealing with Islamic motivated terrorism, then we should avoid a formal definition of Islamophobia at all costs. We must be able to openly critique the ideology which inspires by far the largest number of terror attacks. The government, however, remains committed to establishing a formal definition.

Baroness Cox and Lord Pearson are some of the most outspoken and best-informed peers on Islam related issues. They both put their names down to speak in the debate, but the government deliberately put them at the back of the queue to speak, knowing that this would very likely mean that there would not be time for them to speak. Baroness Cox has fought for years on behalf of Muslim women in the UK who suffer at the hands of Sharia Courts when they seek an Islamic divorce. Many of these women find that their Islamic marriages were not registered and so they have no rights in UK law. Her Bill proposes to remedy this by ensuring that all religious marriages are registered. Lord Pearson has been outspoken on Islam for over twelve years, bravely challenging government policy. The government clearly did not want to be embarrassed by the best-informed peers on the issue and was able to effectively silence them from participation in the debate.

Consequently, there was no serious informed challenge against the proposal to formally define Islamophobia, though Baroness Fox and Lord Singh both spoke against it. Baroness Fox made the clearest points:

“My Lords, it is crucial that we distinguish between aberrant anti-Muslim bigotry and the highly contentious concept of Islamophobia which threatens free speech for fear of it being labelled Islamophobic. Does the Minister acknowledge this chilling effect for liberal Muslims, as is well described in the Don’t Divide Us film “‘Islamophobia!’ The Accusation that Silences Dissent”, muting any criticism of Islam as a religion and even muting critiques of political Islamism, however dangerous? Does the Minister accept the nervousness of politicians from all parties in supporting the Batley Grammar School teacher who was forced into hiding under shouts of ‘Islamophobic’, effectively allowing a default blasphemy law to be snuck in for fear of being called Islamophobic?”

Who is an Islamophobe?

If we formally define Islamophobia then all these individuals and groups could be formally charged with Islamophobia. With two terror attacks in the past month, and a raised threat level, now is the time for the government to call an end to this nonsense. Nothing would be helped by defining Islamophobia, but there is a lot to lose. The government should have the guts to say they have decided not to go down this path. How many more lives need to be lost before common sense prevails?

Who is a terrorist?

The reason that we don’t hear much about terrorist attacks motivated by Christianity is because Christianity really is a peaceful religion. Jesus never killed anyone and advocated an ethic of loving your enemies. Islam, by contrast, was founded by Muhammad, a warmonger who personally killed hundreds of people. As I have explained in much more detail elsewhere, while the vast majority of Muslims are peaceful law-abiding people, Islam itself cannot be described as a peaceful religion. This is why it is much more likely that Al Swealmeen was motivated by Islam, than by Christianity.

This is also why we must be free to talk about Islam and Islamic teaching and practice. If we can no longer talk about the motivations of those who seek to attack us, then we have no chance of resisting their aims. In the meantime, some of us will continue to speak out while we still can.