Peter Tatchell, a well-known and prominent LGBT campaigner, has come out in support of student social worker Felix Ngole’s right to free speech.

Felix recently won his case against Sheffield University, after the university dismissed him from his social work course for his comments on Facebook stating that homosexuality is a sin.

In a BBC radio 4 interview on the Today Show, Felix Ngole was able to further share his faith and explain his beliefs. Despite interruptions from interviewer Justin Webb, Felix commented:

“Let me tell you what my beliefs are as a Christian. Everybody is precious and wonderful in the eyes of God and that reflects on my practice as well. I have worked with gay people, I have socialised with gay people, I have taught students who are gay and nobody has ever made a complaint against me. If you look at the judgment, it clearly states I have got views that have never, ever affected my practice. It is quite possible for someone to hold views and yet be professional.”

Can anyone express anything?

However, Justin Webb was critical of this view, asking:

“Is any view acceptable? Are you generally making the case that not just your view on gay people, but anyone’s view on any group of people, it doesn’t matter provided it’s sincerely held and they say it doesn’t affect what they do in practice?”

Justin Webb criticised Felix’s interpretation of the Bible, arguing that many people who read the Bible say its statements on homosexuality are “not relevant in the modern era.” However, Felix defended his views as Biblical and the word of God.

When asked what the wider implications of the judgment were, Felix answered:

“I think it has some wider application in terms of free speech and the way that freedom of expression is regulated. I feel we live in a free and democratic society and I feel because of this ruling, decision makers, they should be mindful and very, very careful when they make decisions that affect people.” 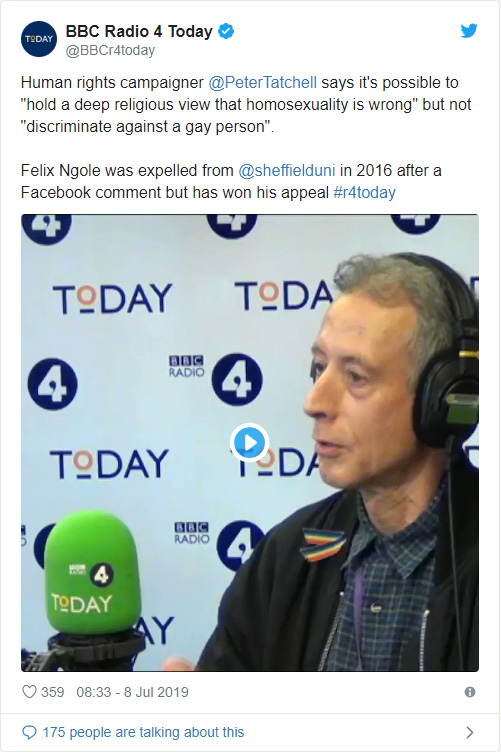 Justin Webb then went on to interview Peter Tatchell live in the studio. Tatchell is a prominent LGBT campaigner, having founded the group OutRage!, a militant LGBT former campaign group, in 1990, and the Peter Tatchell Foundation in 2011, which also campaigns widely on “homophobia, biphobia and transphobia.”

However, somewhat surprisingly, when asked if the University of Sheffield should take Felix back, Tatchell replied:

“Freedom of speech is one of the most important and precious of all human rights so there has to be really strong and compelling reasons in order to restrict it. In this case, the university essentially said that because Mr Ngole holds a particular point of view, and this point of view might lead to him to discriminate when he became a social worker, that the dismissal was fair and just. Now I think that really it is a bit excessive to say that someone should be dismissed from a course on the basis of something they might subsequently do.”

In truth, Tatchell only scratches the surface with his argument. Not only does the university’s decision act on unproven claims, it also bars anyone with similar beliefs to any other profession in the public sphere. The judges pointed out:

“If social workers and social work students must not express such views, then what of art therapists, occupational therapists, paramedics, psychologists, radiographers, speech and language therapists: all professions whose students and practitioners work under the rubric of the same general regulations? What of teachers and student teachers?”

“I think it is perfectly possible that a person can hold a deep religious view that homosexuality is wrong, such as my own mother, but she would never ever discriminate against a gay person. I know that from experience. And it is quite possible that Mr Ngole is one such Christian – that he holds a view that homosexuality is wrong but he would not discriminate and I think, in a free society, we have to make that distinction and allow space for those kind of people.”

Tatchell has previously spoken out in defence of free speech after he was ‘no-platformed’ in 2016 by the National Union of Students.

Tatchell is quite right to defend freedom of speech and expression. As Felix’s ruling explicitly states, if universities could bar people from public professions simply for stating their beliefs, no Bible-believing Christian would be secure.

As the judges from Felix’s case point out:

“In practice, if such were a proper interpretation of professional regulation supported by law, no such believing Christian would be secure in such a profession, unless they resolved never to express their views on this issue other than in private. Even then, what if a private expression of views was overheard and reported?”

In a society that professes to be democratic, there must be room for diversity of opinion and the expression of it, without the fear of being silenced.

Listen to the full episode of Today (Felix’s interview begins at 01:49:12)

Find out more about Felix Ngole
View other articles
|