Hungary: when a nation seeks Christ

It was my great privilege and joy to be invited recently by Andrea Földi-Kovács from the Safe Society Foundation and István Pócza from the Batthyány Lajos Foundation to host a full day of training at the stunning Villa Lónyay-Hatvany on Buda Castle Hill in Budapest.

It was my great privilege and joy to be invited recently by the Safe Society Foundation and István Pócza from the Batthyány Lajos Foundation to host a full day of training at the stunning Villa Lónyay-Hatvany on Buda Castle Hill in Budapest.

These Hungarian organisations advocate for a vision of society built on Christian principles. The Safe Society Foundation says that “the Creator’s law, the eternal values” must be preserved, while the Batthyány Lajos Foundation likewise is committed to Christian values. Led by formidable experts, politicians and journalists, these organisations make a similar stand to our own at Christian Concern, opposing harmful trends in society and promoting the good.

We were joined by well over a hundred leaders and influencers working in government and public life, four weeks ahead of the election, where currently Prime Minister Orban’s party, Fidesz, is up by eight to ten points.

I had been called in because many of the leaders there follow what is happening in the UK and our work at Christian Concern. Hungarians are keen to hear and can hardly believe what has happened in the UK to the cultural fabric and general freedom in our nation. 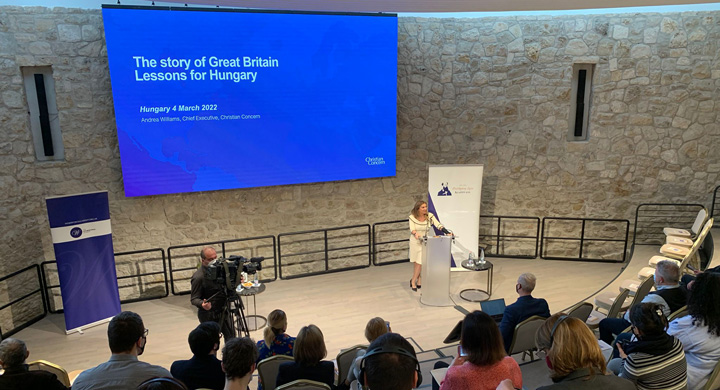 They wanted to hear of what happens when we fail to defend Christian Truth at the heart of our political and cultural institutions. These organisations believe unashamedly in the power of the Christian gospel to bring hope and freedom to their society.

Fidesz and its supporters are passionate to incentivise faith, family and freedom. They have pro-marriage and pro-family policies. They are also firm in their determination to protect children in schools from LGBT ideology.

There is something so freeing and refreshing to be among people who unashamedly love Jesus, the gospel and their nation. It was so inspiring to know that against the backdrop of the Ukraine war many of them would be travelling that night to pick up Ukrainian refugees.

Contrary to what you may hear (and I would encourage everyone to just listen to Prime Minster Orban or to visit Hungary and meet the people), the Orban government is receiving refugees in this humanitarian crisis. Contrary to all propaganda, the Orban government really does rescue men and women persecuted for their Christian faith and even has a minister dedicated to the task.

Strikingly, at this time, it is the European Union, and leaders of some of its member states (Macron of France, Rutte of the Netherlands), that is trying to compel the Hungarians to surrender their own sovereignty in areas that should not concern the EU. Hungary is facing EU sanctions when it is proving itself to be generous and compassionate in the face of war.

As I spoke, the Hungarian government is facing a very strong challenge from the EU over the LGBT media and education law Parliament passed last summer, banning LGBT-themed media aimed at children and minors, and giving the state more say over sex education (this, to prevent NGOs and activist groups from propagandising schoolchildren’s imaginations, as is happening in the UK). There is a referendum on the issue on election day. I’m praying the Hungarian government wins resoundingly.

My message was for the government to stay on track. To learn the lessons of what happens when a nation lets go of her Christian heritage. Members of the Hungarian government are so strong – at the time I was there President Elect Novak said that the government will never stop defending its view of what is right for families, regarding sexual education, but that it also respects the cultural sovereignty of other EU states, whose values may not be the same as Hungarian ones.

So there we have it – it is the Hungarians, along with their neighbours the Poles, who are defending democracy and national sovereignty over and against the culturally imperialistic liberals of the EU and the West who impose their political orthodoxy and punish any dissent. 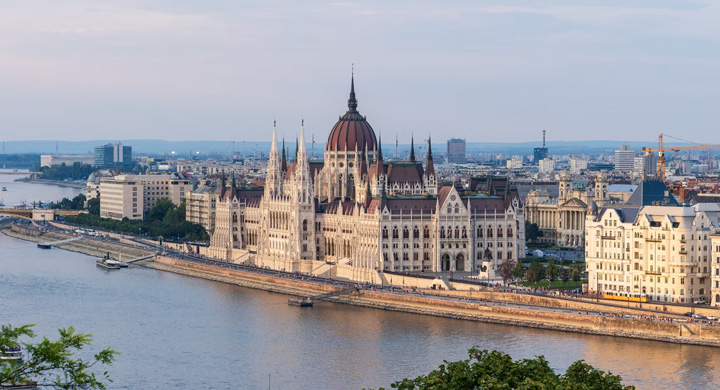 So often, it feels like a David-and-Goliath battle but I am praying that from central Europe – Hungary, Poland and Ukraine we will see nations that love who they are and submit to Jesus and his purpose and pattern for the whole of life. I am praying that these beautiful nations will rise up as beacons of light, justice, hope and Truth in a broken and confused world.

The Hungarians are not content to have survived one Marxist totalitarian attempt to crush the cultural memories that made them distinct, only to find that the forces of post-Christian liberty and capitalism will crush their dream of living as a nation under God – the One True God.

What is happening in Hungary today matters for The West and for Freedom. It energises me to see another way. And it all just feels so normal, kind and free, like stepping outside into cool fresh air after a thunderstorm.

The Christian vision for society is beautiful and life-giving, if only we have eyes to see it.

No party, and no country is or can be perfect this side of Heaven. But as I left Hungary, I felt that I had learned at least as much from them as they had from me.