Humanists UK are one of the leading censors of religious freedom and personal liberty within the United Kingdom today. Their goal, as they even admit, is to take away your right to enjoy many of the fundamental freedoms which make up the fabric of this great nation. Case in point, on 11 October, the Chief Executive of Humanists UK, Andrew Copson, sent out a fundraiser, which Christian Concern has had sight of, explicitly asking for public support to end “the spread of faith schools.” Their goal, as Mr Copson defiantly announces in the first sentence of the fundraiser is to “see an end to faith schools and faith admission in this country.” 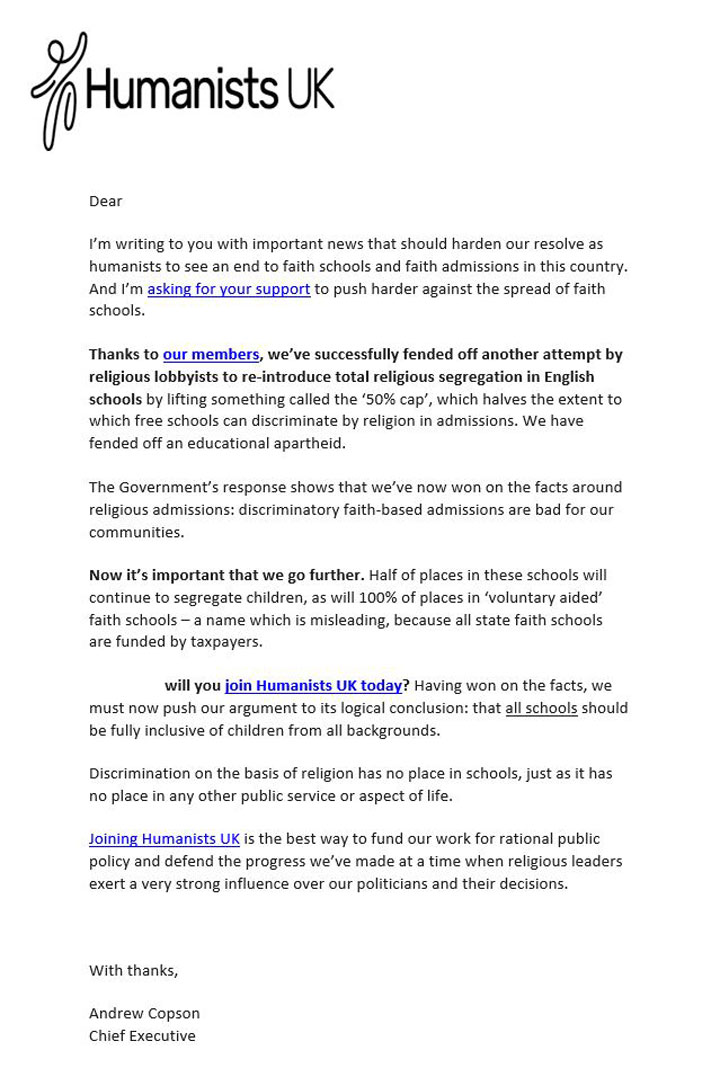 Problem 1: What Humanists UK is asking for is against the law

There are three antecedent problems with such a suggestion. First, not only is the goal that the Humanists UK are seeking undemocratic, it is wholly illegal. Let’s start with the Human Rights Act 1998, which transposes the European Convention for Human Rights into the UK’s domestic law. Protocol 1, Article 2 of that Convention reads:

“In the exercise of any functions which it assumes in relation to education and to teaching, the State shall respect the right of parents to ensure such education and teaching in conformity with their own religious and philosophical convictions.”

Precisely stated, the black letter of the law makes it paramount that the state respect the right of parents to educate their children in accordance with their own religious beliefs. In addition to the Human Rights Act 1998, other binding treaty and convention sources are voluminous on this subject. Article 13(3) of the United Nation’s International Covenant on Economic, Social and Cultural Rights could not be clearer about the right to establish faith schools:

“The States Parties to the present Covenant undertake to have respect for the liberty of parents and, when applicable, legal guardians to choose for their children schools, other than those established by the public authorities, which conform to such minimum educational standards as may be laid down or approved by the State and to ensure the religious and moral education of their children in conformity with their own convictions.”

Article 5(1)(a) of the United Nation’s Convention Against Discrimination in Education adopts nearly the identical language of the Covenant on Economic, Social and Cultural Rights while adding at Article 2 that the establishment of faith schools DOES NOT constitute discrimination against those of other faiths or with no faith:

“When permitted in a State, the following situations shall not be deemed to constitute discrimination,….: (b) The establishment or maintenance, for religious or linguistic reasons, of separate educational systems or institutions offering an education which is in keeping with the wishes of the pupil’s parents or legal guardians…”

Article 26(3) of the Universal Declaration of Human Rights states that “parents have a prior right to choose the kind of education that shall be given to their children.” The United Nations Convention on the Rights of the Child, in Article 5, clearly states that among the most important rights of the child, besides the right to life, are precisely the right to parental love and the right to education. The Convention also explicitly notes, in Article 18, that the rights of parents are not juxtaposed to the rights of children. Moreover, the parents, being the ones who love their children most, are those most called upon to decide on the education of their children.

Equally pertinent is Article 18(4) of the International Covenant on Civil and Political Rights (ICCPR) which states that “the States Parties to the present Covenant undertake to have respect for the liberty of parents and, when applicable, legal guardians to ensure the religious and moral education of their children in conformity with their own convictions.”

One of the means by which Humanists UK seeks to cripple the ability of faith schools to maintain their ethos’ is to aggressively lobby for an end to laws which allow state-funded faith schools to favour co-religionists in their admissions policies. Central to such statutory provisions allowing for these admissions policies is the recognition by Parliament that there is a legitimate aim in allowing faith schools to operate such distinctions in order to safeguard the ethos of these schools, thus providing a proportionate means of guaranteeing the rights promised in all of the treaties mentioned in the preceding paragraphs.

What Humanists UK is seeking to do could amount to indirect discrimination within the meaning of the Equality Act 2010 by creating a disadvantage for Christian parents seeking a faith-based education for their child; as well as for faith schools looking to safeguard their Christian ethos. At the very least, the Humanist UK position is anti-parent and anti-educational choice. It is bad for fundamental freedoms and antithetical to the pluralism that makes this country so great.

Problem 3: the charitable objections of Humanists UK are incompatible with human rights

This leads us to the third, and more serious issue with the Humanists’ fundraiser, and in fact their charitable objectives. Not only is the right to establish and operate Cristian schools a protected human right within the United Kingdom, but freedom of religion itself has been deemed by the courts to make up one of the fundamental elements of a democratic society. In fact, the European Court has gone so far as to say that the “pluralism indissociable from a democratic society, which has been dearly won over the centuries, depends on it.”

Humanists UK’s position is to destroy this right, and along with it many of the other rights we hold precious in the United Kingdom: freedom of expression, freedom of conscience, parental rights, the right to privacy, freedom of association and freedom from discrimination. Humanists UK, at its core, wants to make Christians and other people of faith second-hand citizens by taking away from them rights enjoyed by everyone else in this nation.

The Human Rights Act 1998, and the Grand Chamber of the European Court of Human Rights have spoken to such objectives by submitting that associations which seek to undermine the fundamental principles of a democratic society are not worthy of respect and are incompatible with the protections guaranteed by the European Convention for Human Rights.

Given how open Humanists UK is in its desire to limit our fundamental freedoms, and is touting this fact as part of its fundraisers, perhaps it is time for the powers that be to examine whether their charitable objectives are, in fact, in violation of the Charities Act 2011. At first glance, the goals of the charity fail the public benefit test established by Section 2(1)(b) of the Act. Moreover, as the fundraiser makes clear, the objectives of Humanists UK are actually diametrically opposed to 3 of the 13 public benefit purposes listed in Section 3 of the Act: (b) the advancement of education; (c) the advancement of religion; and (h) the advancement of human rights, conflict resolution or reconciliation or the promotion of religious or racial harmony or equality and diversity.

At odds with the law?

Perhaps it’s time to start taking a long hard look at what the Humanist UK agenda really entails. What the recent Humanists UK fundraiser evidences is that they have a real credibility problem when it comes to education policy. Not only do they seek to take rights away from literally millions of parents across the country, but their aims are also clearly at odds with the wealth of established educational law, both domestically and internationally. An even larger question exists as to both the public benefit Humanists UK provides and whether their charitable aims run afoul of the Charities Act 2011. One thing however is clear. Their goal to mortally wound faith-based education in this nation is undemocratic and undermines the values upon which this nation was built.