Roger Kiska comments on the recent advice issued by the Department of Education about managing the many protests outside schools concerning RSE.

Christian Concern was this week made aware of an advice document sent to Local Authorities by the Department for Education (DfE) about managing issues involving parental dissent over LGBT elements being taught to their children as part of relationships education (primary) and relationships and sex education (secondary).

Frankly speaking, the document should outrage us all. The DfE, in no uncertain terms, portrays parents as uninformed, out of touch and easily led astray; parental rights organisations as religious extremists; and media outlets who air stories about parental concerns about the new regulations as sensationalist and inflammatory.

The document also characterises schools who champion LGBT themes as promoting an inclusive curriculum while those who are concerned about what our children are being exposed to as being anti-LGBT teaching activists. Among the strategic advice provided by the Department to Local Authorities is having Council Members issue joint statements showing “strong support” for teaching about LGBT:

“You [Local Authorities] may want to consider the following activities to help manage the situation across the local area:

“⁃ Secure a joint statement from all Council Members on the situation. Depending on the position of those members, it could range from calling for calm parental engagement with schools on their concerns through to strong support for Relationships Education and/or teaching about LGBT.”

“⁃ Consider nominating a single point of contact for the school(s), who can keep in regular contact and escalate issues within the LA and to other agencies (e.g. the police)…”

Placing ‘spies’ among disenfranchised parent groups to gather evidence against them:

“⁃ Ensuring a Council officer is present at any protests to collect evidence of the disruption and be ready to report any suspected criminal behaviour.”

And having early warning systems in place where parents seem to be showing ‘too much’ interest in what their children are learning:

“In areas where we have seen the beginnings of coordinated activity, the following signs have been seen:

“⁃ Becoming aware of WhatsApp groups (or other social media, such as Facebook) discussing concerns about Relationships Education/teaching on equalities/teaching on LGBT.”

The advice even recommends that Local Authorities, if they already do not have one, pass a byelaw to prevent parents from protesting at all near their children’s schools:

“Whether there are existing byelaws which address the issue and if not, whether it would be appropriate to make a byelaw (for example under section 235 of the Local Government Act 1972 – guidance on making byelaws is available, Local government legislation: byelaws.”

The DfE just doesn’t get it: parents’ concerns are legitimate

What is perhaps most perplexing about this document is how absolutely tone deaf the DfE is being towards the genuine and real concern of parents about what is being introduced to their children. The DfE seems to have a non-rebuttable presumption that all LGBT teaching done in schools is age appropriate, virtuous and beyond reproach. Therein lies the problem.

What we are seeing throughout the United Kingdom, is material which many parents find egregious and wholly inappropriate for their children to be exposed to. Not once has the Department or Ofsted made a public stance against any of that material being brought into our schools. Not in Warwickshire, where the county council has sought to add the teaching of self-stimulation to primary school aged children as part of the ‘All About Me’ primary school RSE policy. Not in Birmingham, where young children were being taught the ‘No Outsiders’ programme which introduces transgenderism and homosexual relationships to children as young as 5 through emotive storybooks with full foreknowledge of the massive impact such story books have on the development of a young mind. Not in Croydon, where primary aged pupils are being forced to take part in Pride events and colour LGBT symbols as part of their art classes with no right of withdrawal.

In trying to characterise parental rights organisations as out-of-touch religious zealots who need to be sniffed out and in some cases reported to the police and Prevent, what the DfE should realise is that organisations concerned with parental rights (like Christian Concern) do not contact parents, it is parents who contact us. Often on a daily basis or even several times a day. The fact is that parents have never wanted these elements introduced into their children’s education. That was evident during the consultation period for the draft law when the vast majority of parents who made submissions expressed their opposition to the new regulations. It was evident during the parliamentary debates about the new regulations where 118,000 parents signed a petition in opposition to the new law. It is evident now as parental outrage, like in Birmingham, begins to swell as some of these materials are making their way into schools.

Parents are invested because their children’s futures are at stake

Despite how parents are presented in the Departmental Advice, as sheep being led astray by opportunistic campaigning organisations, the reality is far different. Parents are tuned in because, believe it or not, they have a much bigger stake in how their children are being raised than does the DfE or some activist head teachers.

Not surprisingly, parents do not want a stranger telling them what is and what is not age appropriate for their children being exposed to. Nor do they want bureaucrats telling them why their religious objections are unfounded and outdated. Parents are not ignorant to the fact that while the DfE demonises parental rights campaigning organisations for having any role in our schools, they are at the same time rolling out the red carpet for LGBT campaigning organisations, even utilising rainbow flags in their email signature lines and literally labelling themselves as LGBT+ champions. 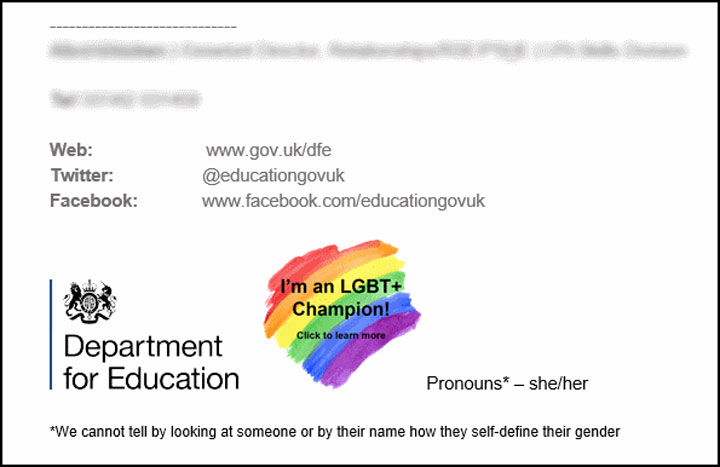 Campaigning organisations play an important role in a democratic society. Parents have a right to seek advice from experts in the field and to be organised in their opposition to teaching that they feel breaches their parental rights. Parents are not obliged just to take the DfE’s word for it that everything in our schools is fine, when they can see that some of this material is clearly anything but fine.

The Department’s advice document, in a single swoop, takes aim at numerous fundamental rights including freedom of association, freedom of religion, parental rights and even freedom of the press. The very thought that it has been issued by a government department is an affront to the British values that the Department claims to promote.

Parental love and the future

The take away from this advice is that the Department is very concerned about the cold reception its new regulations have received and are digging in their heels to ensure parents fall in line. They are seemingly willing to take whatever steps possible, by hook or by crook, to silence any dissenting voices. My advice to them is that they should not underestimate the strength of parental love and concern. Parents will stay involved because the hearts and minds of their children are at stake. And on this latter point, we should be proud as a nation that enough of a family culture remains that a fight can still be waged on behalf of our young ones. It is a fight that may well define the next generation.