Tim Dieppe, our Head of Public Policy, comments on the recent news that a father in Canada was jailed for referring to his daughter as a girl.

A Canadian father has been arrested and jailed for referring to his biological female child as his ‘daughter’ and for using female pronouns to refer to her.

The father’s name is Rob Hoogland. He has a 15-year-old daughter who wants to identify as male. His daughter started to identify as a boy at school when aged 12. The school had helped her to choose a new name, and the first her father heard of it was when he saw her new name in her class’s yearbook. The school had determined that her father had no right to know his daughter’s “preferred sex, gender or name” at school.

Hoogland discovered that the school had been showing her sexual and gender identity materials which amount to transgender ideology propaganda videos.  The school also referred his daughter to a psychologist and LGBT activist who predictably referred her for testosterone injections when she was only 13 years old.

Rob Hoogland refused to give permission for her to have testosterone injections, at which the hospital informed him they didn’t need his permission and would go ahead anyway. Hoogland then took legal action to prevent them from administering testosterone. In January this year, with his daughter now aged 15, the highest court in British Columbia ruled that the father could not prevent doctors from giving his daughter testosterone injections. The court also ruled that Hoogland must “acknowledge and refer to [his daughter] as male,” and refrain from talking to the media about her case.

Hormone treatment for children now illegal in the UK

It should be noted, that ever since a landmark ruling in December last year, giving such hormone treatment to children under 16 years old is now illegal in the UK. It is also now advisable to require authorisation from a court for those aged 16 and 17. Rob Hoogland was therefore objecting to treatment which a UK court has ruled to be unlawful. This ruling was made in a case against allowing hormone treatment for children in which 23-year-old Kiera Bell joined others to argue that such treatment should be banned. Kiera Bell was given hormone treatment aged 16 and subsequently had a double mastectomy. She has now de-transitioned, but some of her treatment is irreversible. She argued that she could not consent to such treatment when she was 16-years old, even though this is what she clearly requested at the time.

Rob Hoogland clearly feels that he cannot in conscience respect the court order. Having failed to get any sympathy or common sense from the courts, he decided to appeal to the court of public opinion. He told The Federalist: “I had a perfectly healthy child a year ago, and that perfectly healthy child has been altered and destroyed for absolutely no good reason.” He added, “She can never go back to being a girl in the healthy body that she should have had. She’s going to forever have a lower voice. She’ll forever have to shave because of facial hair. She won’t be able to have children…”

Rob was convicted of ‘family violence’ for expressions of rejection of his daughter’s gender identity. Rob also granted two YouTube video interviews to Canadian commentators about his situation. Both of these have been taken down due to threats of litigation. You can watch another video interview of him here.

Rob has said: “What kind of father would I be if, in ten years’ time she’s de-transitioning, and she asks me ‘why didn’t you do anything to stop this? None of your stuck your neck out for me back then.’”

Now Rob has been jailed for contempt of court because he would not stop referring to his daughter in female terms.

Jordan Peterson warned this would happen

Canadian psychologist Jordan Peterson originally rose to fame after opposing Canadian Bill C16 in 2016 which he warned could lead to someone being fined or jailed for misgendering someone. His stance was dismissed as alarmist, but he has now been vindicated in his warnings and has tweeted to say that as he had warned, this was inevitable. Some church leaders also warned about the likely consequences of this Bill. 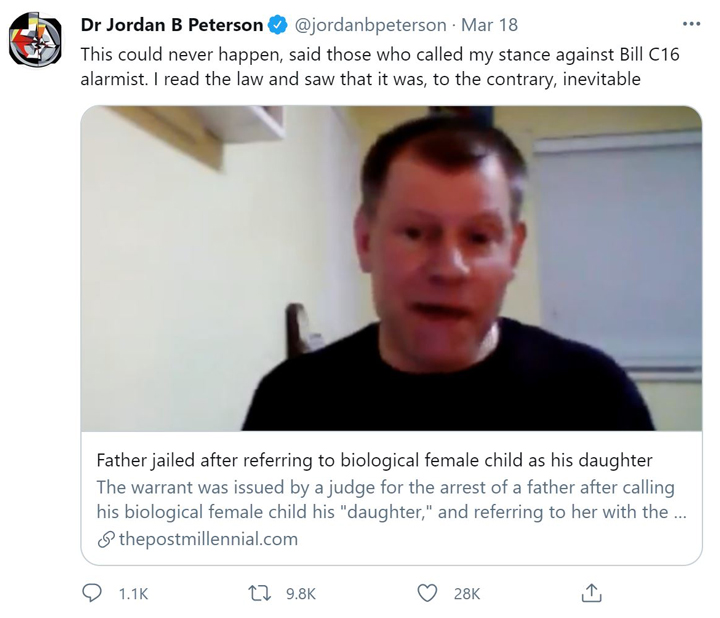 Jailed for speaking the truth

Jailing someone for speaking truthfully about his daughter’s gender marks a new low in restrictions of freedoms in the West. It goes to show just how intolerant the LGBT lobby is, and how totalitarian governments can quickly become. Parents in Canada are rightly concerned about where this could lead. It marks a dramatic and open attack on family life and freedom of conscience.

If Canada sounds far away, it is not that far in culture. It is, sadly, not difficult to imagine this happening in the UK. Hate Crime laws in Scotland have moved significantly to inhibit free speech. Meanwhile police continue to record non-crime hate incidents on the basis that someone perceived that something was offensive.

The church cannot just ignore what is happening in culture and leave it to others to set the rules. We need to speak prophetically and challenge the government on these things. As our culture abandons Christian morality, an anti-Christian morality is rapidly becoming mainstream.

No-one should ever be jailed for speaking the truth, but sometimes truth comes at a price. This parent could not let the state silence him or dictate how he refers to his daughter. Will you allow anyone to dictate what you say?