A pastoral administrator sacked for two Facebook posts that raised concerns about transgenderism and sex education at her son’s Church of England primary school is set to have her legal case heard.

Supported by the Christian Legal Centre, Kristie Higgs, 44, will challenge her employer, Farmor’s School in Fairford, Gloucestershire, for discrimination and harassment on the grounds of her Christian beliefs.

The hearing will take place at Bristol Employment Tribunal on September 21-25.

In late October 2018, mother of two, Mrs Higgs, who for seven years had worked at the school without any complaints, shared two posts on her private Facebook page, that made no mention of her employer, under her maiden name.

The first post encouraged friends and family to sign a petition challenging the government’s plans to introduce Relationships and Sex Education (RSE) to children in primary schools.

The post flagged that a government consultation on plans to make RSE mandatory for children as young as four was coming to a close, and asked its readers to sign a nationwide petition calling on the government to uphold the rights of parents to have children educated in line with their religious beliefs.

A similar petition was subsequently signed by over 115,000 people and was debated in parliament.

In the second post, Mrs Higgs shared an article from Judybeth.com on the rise of transgender ideology in children’s books in American schools and added her own comment: ‘This is happening in our primary schools now’.

The article critiqued the same LGBT ‘No Outsiders’ books promoting transgenderism to children that Mrs Higgs had discovered were being introduced in her son’s Church of England primary school.

The following weekend, Matthew Evans, the head teacher of the school where Mrs Higgs worked, received an anonymous complaint which described the posts as ‘homophobic and prejudiced to the LGBT community’. In response, Mr Evans asked the complainant to find more “offensive posts” on Mrs Higgs’s Facebook page, and promised to take immediate action.

The following week, despite the posts being only visible to her friends, Mrs Higgs was pulled into a meeting by Mr Evans.

Mr Evans read a letter out telling her that she would be suspended and that an investigation would follow for gross misconduct. Told she had to leave the premises, Mrs Higgs, shaking and tearful, collected her things and left the school grounds.

An investigation into her conduct was launched, which involved Mrs Higgs being questioned on why she had used her school email to receive ‘inspirational’ quotations from the Bible.

The investigation culminated just days before Christmas when Mrs Higgs was asked to attend a disciplinary hearing at a hotel.

For six hours until 8pm, Mrs Higgs was subjected to intimidating questioning by the panel of three governors, supported by three other members of staff. Her posts were compared to ‘pro-Nazi’ views, and she was accused of intolerance.

When she tried to explain the context of her Christian beliefs she was told: “keep your religion out of it.” Mrs Higgs argued that her aim had been merely to raise awareness among parents of the Government’s education plans and the transgender books being taught in primary schools.

The academy concluded, however, that Mrs Higgs would be dismissed for: ‘illegal discrimination’, ‘serious inappropriate use of social media’, and ‘online comments that could bring the school into disrepute and damage the reputation of the school.’

‘You had not discriminated against anyone’

Yet the academy admitted in writing that: “Regarding bringing the school into disrepute…we agree that there is no direct evidence that as a matter of fact that the reputation of the school has been damaged to date.”

Despite one of the posts Mrs Higgs shared mentioning that ‘freedom of belief would be destroyed’, the academy asserted that: “We concluded that no action was taken because of your religion. The disciplinary occurred for reasons other than your religion.”

The academy stated: “As an inclusive employer, Farmor’s school recognises and protects the statutory rights of its staff. Such rights however are not absolute and we are concerned that you did not demonstrate an appropriate understanding of the school’s requirement to respect and tolerate the views of others and to role model such behaviour.”

In January 2019 she was sacked for gross misconduct without notice, her appeal was rejected and she was left with the prospect of never being able to work with children again.

Lawyers representing Mrs Higgs will argue that her sacking breached her freedom of speech and freedom of religion, citing the legal precedent set at the High Court in 2019 in the case of Felix Ngole.

‘It broke my heart’

“The whole experience broke my heart.

“I have been punished for sharing concerns about Relationships and Sex Education. I hold these views because of my Christian beliefs, beliefs and views which are shared by hundreds of thousands of parents across the UK. My number one concern has always been the effect that learning about sex and gender in school will have on children at such a young age. I have not discriminated against anyone.

“Through my case I want there to be renewed freedom for others, especially Christians, to express their beliefs and opinions without fear of losing their jobs.”

Christian freedom on the line

Andrea Williams, chief executive of the Christian Legal Centre, said: “This case is about the freedom to hold Christian views about what it means to be human. Many Christians have faced pressure for expressing these views in the workplace before, but in this case, Kristie has been dismissed for sharing her views among friends on Facebook.

“What Kristie shared on Facebook simply reflects the genuine and justified concerns of a parent about the sexual ideology currently being imposed on her own children and thousands of children across the UK.

“Kristie has not only lost her job, but her whole career is now tarnished with the accusation that for holding these views she is now a danger to vulnerable children. This is despite an exemplary record at the school and in her work with youth in the wider community. If Kristie does not win this case, due to one complaint, she will never be able to work with children again.

“Kristie is a kind, loving and courageous woman, and we will stand side by side with her as she fights for justice.” 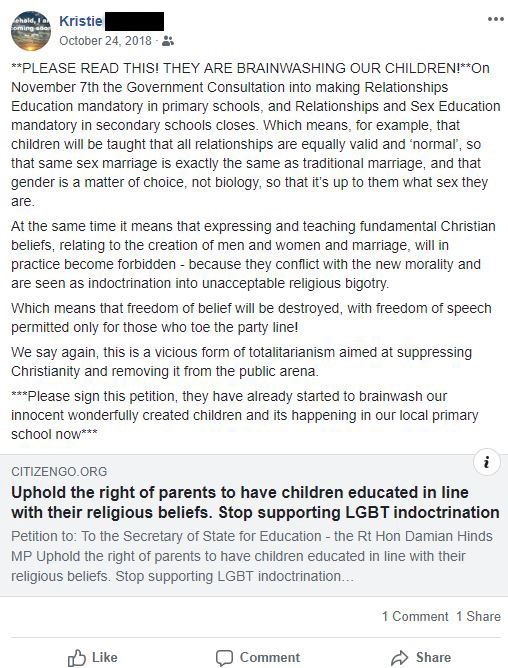 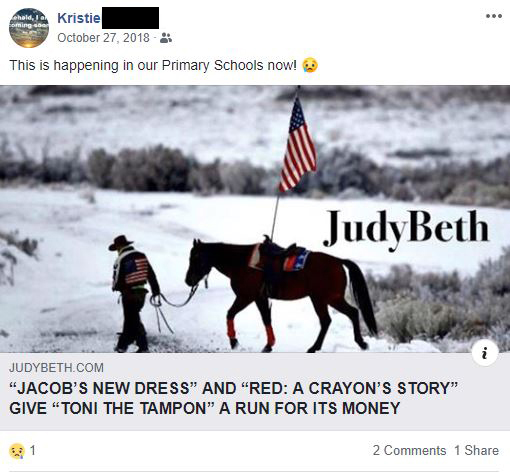 Back to press office
|