The new cabinet: what does Badenoch mean for equalities?

Kemi Badenoch was appointed Secretary of State for International Trade and President of the Board of Trade by Liz Truss on 6 September. When Rishi Sunak became Prime Minister, she was also appointed Minister for Women and Equalities on 25 October.

Badenoch stood as one of the Conservative Party leadership candidates in July. In my analysis of the track records of the eight original candidates on moral issues I concluded that she was the most preferred candidate at the time. 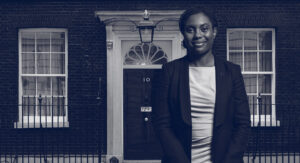 Badenoch is a sex realist. She was revealed to have referred to transgender women as ‘men’ in a leaked tape recording from 2018. In July of this year, when she was also Equalities Minister, the government announced that all new public buildings in England should have separate male and female toilets.  The announcement said: “The rise in ‘gender neutral’ toilets raised safety concerns from women who feel they are losing privacy and being unfairly disadvantaged.” Badenoch is quoted in the announcement, saying: “It is vital that women feel safe and comfortable when using public facilities, and that their needs are respected.”

At the launch of her Conservative Party leadership campaign, Badenoch’s team attached handwritten signs saying ‘men’ and ‘ladies’ onto the doors of the gender-neutral toilet facilities of the building, in a clear sign that she does not approve of gender-neutral facilities.

The Equality Act ‘is a shield, not a sword’

When asked about claims by Ben Cohen of Pink News about her record on LGBT issues, Badenoch said in Parliament last week:

“As we begin a new era of equalities, I would like to say that the Equality Act is a shield, not a sword. It is there to protect people of all characteristics, whether they are young or old, male or female, black or white, gay or straight. We are running a compassionate equality strategy and we should not be distracted by people who use Twitter as a way to insult or accuse Members of Parliament.”

The Equality Act has been used aggressively by campaigners to further a hierarchy of rights, where some characteristics are more protected than others. It is a positive development to see the Equalities Minister stand up to this.

Badenoch is married to a Catholic man with whom she has had three children. She has described herself as “an honorary or associate member of the Catholic Church.” When asked whether religion plays a part in her politics, she replied “Not particularly, no. I define myself as a cultural Christian. My grandfather was a reverend.”

Badenoch has also been outspoken in support of free speech. In a speech in July she said:

“Free speech is no longer something we can take for granted as a commonly shared value… and this shift in attitudes has [led]there have been many incidents in universities of events disrupted […] because their views are too controversial… The second bit you often hear is that the debate on free speech is a conspiracy whipped up to spark a culture war, or it’s a cover for bigoted middle-aged white men to spout politically incorrect nonsense. Well I’m not middle aged, I’m not white, and I’m not a man…”

“I believe that free speech cuts across all shades of politics and we need to defend each other irrespective of which party we are members of. The reality is that attacks on free speech usually harm the people who have the least power.”

In her pitch for leadership of the Conservative Party written for The Times, she concluded with “I’m putting myself forward in this leadership election because I want to tell the truth. It’s the truth that will set us free.”

It is good to see how Badenoch has spoken and also acted on transgenderism and free speech. There are constant challenges in these areas. One of the policy issues she will oversee will be on banning so-called ‘conversion therapy’. This is really about banning consensual conversations. As a defender of free speech, Badenoch should be opposed to any such ban. We shall see. Her values are sure to be tested in this role. Do pray for her with all the responsibilities and influence that she now has.